Can You Play Guitar Hero On Xbox One: Possible Alternatives That You Can Go For 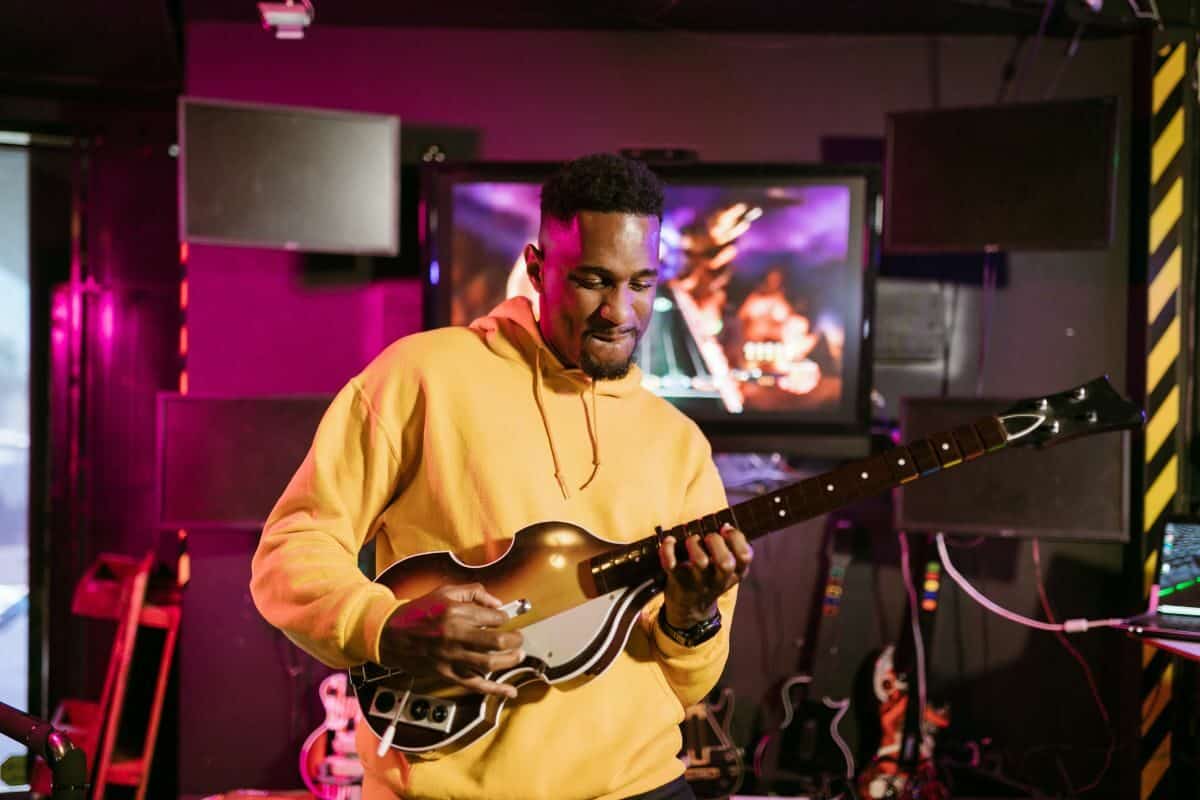 Are you a long-time Guitar Hero fanatic looking to know if you can play the game on your Xbox One? If so, then you’re definitely in the right place.

In this article, you’ll get to know all about can you play Guitar Hero on Xbox One, how to run the game, possible alternatives, and Guitar Hero Live.

Yes, Guitar Hero will still work on Xbox One and you can still play the game in 2022. However, there might be compatibility issues depending on the version of the game you’re trying to play. While old Guitar Hero games will still work on Xbox One, some new features of the console might not work properly. For instance, older games are unlikely to be compatible with Xbox One’s online multiplayer mode.

You can connect your Guitar Hero Guitar to the Xbox One, but you’ll require a special adapter. The adapter can be easily bought online or as a part of the bundle that includes the guitar and the game. Once you’ve got the adapter, plug it into your Xbox One while plugging the guitar into the adapter. You will then be able to play the Guitar Hero game using your guitar.

The gameplay of Guitar Hero is very similar to most other music and rhythm video games. The player should press buttons on the controller in time with scrolling notes on the screen for completing the song. The basic mechanics of the game are based on “Guitar Freaks” by Konami.

In Guitar Hero, the player should use either the guitar peripheral or a standard controller for playing the scrolling notes. The guitar peripheral comes with five different-colored fret buttons near the nut of the guitar, a whammy bar, and a strum bar on the body of the guitar. The peripheral will also have other buttons to navigate the game’s menus. Music will be displayed on the screen through a series of notes, matching in positions and color to the fret buttons. The notes will be scrolling down the screen on the fretboard.

For hitting a note, the player should hold down the fret button corresponding to the note displayed. Then toggle the strum bar at the same time as the notes are passing a marked area on the screen.

The faster series of notes can be played on the guitar controller using Hammer On/Pull Off techniques. In this technique, the player doesn’t have to strum each note. It’ll support toggling the handedness of the guitar, which allows both right-handed and left-handed players to utilize the guitar controller. A player who is using the standard controller will simply press the buttons that correspond to the displayed notes.

The player will be awarded points for hitting notes, sustains, and chords. You can then increase a score multiplier by pressing/playing a series of consecutive notes successfully. There will be a rock meter tracking your performance based on the success or failure of hitting notes. In case the meter drops too long, the track will prematurely end in failure for the player.

The player will also earn “Star Power” by playing glowing notes perfectly and by using the whammy bar during sustains. As soon as the Star Power meter is filled halfway, Star Power will be activated by briefly tilting the guitar controller vertically. You can even do it by pressing a specific button on the standard controller. Activating Star Power doubles the scoring multiplier, making it easier for increasing the Rock Meter by playing correct notes. You can strategically make use of Star Power for playing through difficult sections of tracks you may have otherwise failed.

Gaming modes and other features

Guitar Hero’s primary mode of play is the Career Mode. In this mode, the player and in-game band will be in different fictional performance arenas, performing sets of 4-5 songs. Completing tracks in this mode will unlock the songs to be played within other game modes. The players will be able to choose their on-stage character and their guitar. The game’s elements will have no effect on gameplay, but will have an effect on the visuals during the performance.

In the Career Mode, you can earn money using your performance. You can use it at the in-game store to redeem the bonus content, like additional songs and finishes are unlocked. Quick Play mode will allow the players to play unlocked tracks, selecting the difficulty, venue, character, and guitar. Once you’ve completed a son in either Career or Quick Play mode, you’ll be given a score. Moreover, you’ll also get a 3-5 star rating, depending on your overall performance.

The Multiplayer Mode will present two players with the chance of competing against each other for the same song. Two fretboards will appear on the screen, one for each player. The players will be alternating between different sections of the track in a dueling manner. The player having the highest score at the end of the track will win.

The four difficulty levels for each track will provide you with a learning curve, helping you progress in your skill level. The first difficulty level is Easy. This level will focus on the first three fret buttons. Moreover, it’ll display a significantly reduced amount of notes for you to play. The Medium level will introduce a fourth fret button while also adding in more notes. Meanwhile, the Hard difficulty level will include the final fret and add additional notes. The Expert level might not introduce any new frets, but it’ll add more notes that will be challenging.

Play Guitar Hero Live on Xbox One and Xbox 360

Guitar Hero Live shut down a few years back after the game’s original release. The game has provided a decent amount of value to people who have purchased the game upon its release. After Guitar Hero TV closed, the players were only able to use 42 songs as the song library was shut down. Those 42 songs were the original songs that were present on the disc when the game launched.

Guitar Hero Live is an exciting music rhythm game developed by FreeStyle Games and released by Activision. The game is the 7th instalment of the Guitar Hero franchise. The game came out for PlayStation 3, PlayStation 4, Xbox One, Xbox 360, Wii U, and Windows Phone 8. Like the previous instalments, Guitar Hero Live will be compatible with headphones when you’re performing the guitar moves. This version comes with numerous features that weren’t present in the previous instalments.

For players who’ve played the previous instalments of the game, you’ll notice that the graphics and style have been improved. You can even create your own Guitar Hero, design your guitar, personalize it, select the songs you wish to perform, and view your performance on television. The other features include the option to edit your guitar moves, change your posture, and view the song list. The game will offer the option of creating your own video messages for others to see. If you’ve never played Guitar Hero before, you can easily look for tutorials online and familiarize yourself with the controls.

You can find objects and items similar to those present in previous instalments of the Guitar Hero games. It’ll include pick-up sticks, the gig bag, the electric guitar, the tuner, the guitar stand, the amps, the guitar pick-ups, and the effect pedals. The Guitar Hero Xbox One version will come with an interactive tuning tool. It will allow you to read and adjust the tone of the guitar, amplifier, and other instruments in Guitar Hero. You can even find many other features in the game, allowing you to play solo, create your backing tracks, play in guest spots, play with a band, and jam with others.

The overall action of the Guitar Hero Xbox One will be similar to that of the original game. You’ll be able to play through different instalments of the game while also playing some of the episodes from instalments two through seven. The Guitar Hero will allow you to either play solo or multiplayer, depending on the mode you prefer. If you’d like to play, you can either learn to play a virtual guitar or a standard guitar. You can even play the guitar similar to the one used in the game.

The multiplayer modes will allow you to create your own band with others or choose to play with other players. If you’d like to play with a band, then you can either hire someone or create the band yourself. You’ll need a guitar, a keyboard, a drum set, a bass guitar, and an amplifier. For creating a band, the player who performs will be selected by you. You can then select different musical styles. There will be a ranking system, allowing you to know who is best at playing the game.

You’ll be able to play one song at a time until you’ve finished up the track. Likewise, if you’d like to play the multiplayer mode, then you can simply connect it to your Xbox One. You’ll be able to switch back and forth between playing a Multiplayer Mode and a Single Player mode at any time.

The on-disc soundtrack of Guitar Hero Live features 42 tracks, spanning a diverse selection of genres. The developers recognized that challenging guitar tracks wouldn’t be limited to rock music. The game’s soundtrack featured songs by Blitz Kids, The Black Keys, Green Day, Fall Out Boy, My Chemical Romance, The Lumineers, The Rolling Stones, Pierce the Veil, The War on Drugs, and Skrillex.

The game also offered a time-limited premium show featuring three recordings by Avenged Sevenfold, including “Nightmare”, “Shepherd of Fire”, and “Buried Alive”. The tracks were filmed from their performances in Mexico City and England. Additional tracks were provided through GHTV. 200 tracks were made playable on GHTV at launch. The developers did their bit in adding new tracks to GHTV regularly until the library shut down. There will be no backward compatibility with controllers or songs from previous editions of the franchise.

FreeStyleGames’ developers justified the decision, stating that Guitar Hero Live was a completely new game and the existing content wouldn’t work because of changes in the core gameplay. There wasn’t any traditional downloadable content for the game. Instead, players were able to use the streaming nature of GHTV for providing new tracks.