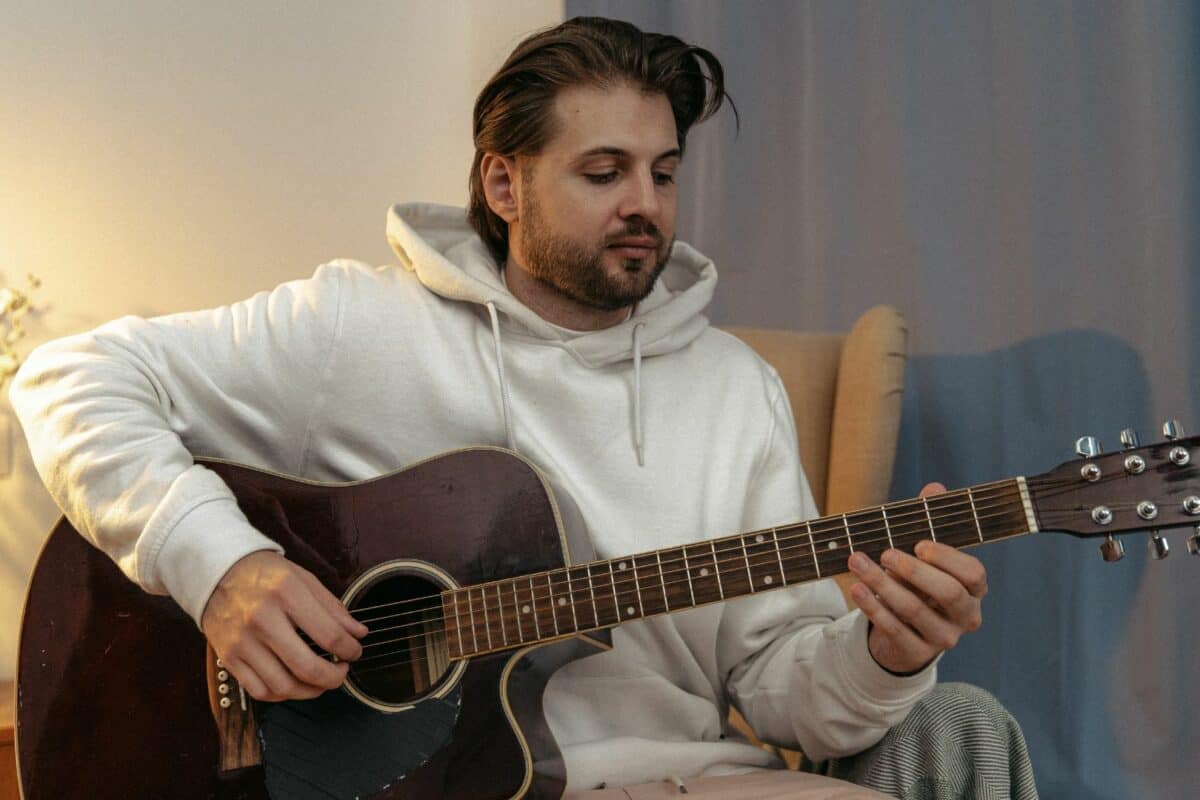 Do you feel that musicians, especially guitarists, have it easier with women, and women are automatically attracted to them? If yes, then you’re definitely right and this has been backed by science.

Guys playing guitar come across as incredibly appealing and attractive. Playing guitar has both physical and psychological reasons why it appears to be an activity that attracts others. Guitarists often have a lively nature, a captivating aura, and intrigue that interests women.

In this article, you’ll get to know how science backs the fact that playing guitar attracts women and the top reasons why guys playing guitar find it easier to attract women.

While you might not have what it takes to match the magnetism of Lenny Kravitz or Brendan Urie with women, there is one common denominator – they play guitar. Playing guitar has long been seen as a hack that attracts the ladies. Now, even science backs this cliché and there are studies and data proving this theory.

Multiple independent studies have found that women find men who play guitar more attractive. The first was conducted by researchers in France, and it’s based on a young man asking strangers on a date. The results were outlined in an article published in Psychology of Music. In the second study, the researchers used Facebook Friend requests for gauging guitar holding attractiveness. The results were detailed in an article published in Letters on Evolutionary Behavioral Science.

In the first study, the researchers from Université de Bretagne-Sud, France enlisted the help of a young, good-looking male volunteer. He got asked to approach 300 ladies on the street and tell them that they were very pretty. He then had to ask for their number.

During the second study, the researchers from Israel’s Ruppin Academic Center created multiple Facebook accounts for an attractive young man. In one of the accounts, the profile picture showed the guy holding a guitar. In the other profile, he wasn’t holding a guitar. The researchers would then send friend requests to 100 young women who had listed themselves as single on their profiles. They found out that 14 out of 50 friend requests got accepted when the guy appeared with a guitar.

Meanwhile, the number was drastically low for the other account. Only 5 out of 50 friend requests got accepted with the guy not holding a guitar in his profile picture.

None of the researchers mentioned the exact reason why women find men playing guitar more attractive. However, there are many reasons why this happens. Continue reading this article to know what are those reasons.

If you’ve been looking to learn a new instrument or any skill to attract women, learn to play the guitar. Although women find most men who sing or play any instrument sexy, there is something special about guys playing guitar. Here are some of the top reasons why women are more attracted to guys playing guitar.

Guys perform songs they like on their guitar, but they also play songs that have a significant meaning to them. Watching a guy play guitar can be a great way of understanding what he is thinking about, what touches him, and how he feels about certain things.

Getting to peak into a guy’s emotional side isn’t something that most women get to experience right away. However, it is something that most of them want to see. Of course, they don’t want a guy who is too emotional. Knowing that a guy is capable of having emotions and keeping control of them is a big positive for women. It signifies that the guy will be caring, compassionate, and understanding.

Moreover, music sparks emotions in people, including in the women you like. In fact, if you know what a woman is thinking, you’ll be able to spark an emotional response. It’ll make her pay attention to you very quickly. You’ll be able to know how she feels when a song touches her thoughts and likeness.

2. Guys who play guitar are often the star of the party

Most of the time, a lady might not notice a guy who likes her. They don’t notice until the guy pulls out his guitar and performs at a party or a gathering. The girl is instantly swept off her feet, and it becomes a great origin story of their relationship. If a guy is playing at a party, every note that he makes will make him seem more attractive. Moreover, women will also see your emotional side as you’ll be playing songs that mean something to you.

3. A guitarist can easily serenade his lady

Playing a song, especially for your significant other, is the biggest tribute that you can give to her. You can choose a special song that speaks to her and makes her understanding the things you feel about her. You’ll be able to say all the things that you wish to say without directly saying them. However, it’ll still have the same effect on her. She’ll find this gesture incredibly romantic and sexy, especially with you playing guitar for her.

While you can stand outside her window at night and serenade her, she’ll likely find it cheesy and the neighbors won’t like it either. It would be better if you just give a special performance of the most romantic tracks in her house.

4. Men who play guitar are perfectionists

5. The guy appears to be extremely creative

Playing guitar is very creative and creativity is extremely sexy. Creativity symbolizes not just intelligence, but a strong work ethic. These are two things that most women actively look for when looking for a guy. There are multiple ways guys can show off their creativity. While there are things like painting and drawing blueprints that show creativity, they’re not as attractive to women. Playing guitar is not just creative, but highly attractive as well. Women cannot help themselves but be impressed with guys who play guitar.

Even if the guys who play guitar aren’t bad boys, they will still have a bad-boy vibe. There is something edgy about being able to play the guitar and be a rock star that makes them seem more tempting. Whom do you think seem more attractive, guitarists or flutists?

7. Their passion for playing guitar is sexy

Seeing a guy being so passionate and involved in the things they like is very attractive. Women find it irresistible when a guy is extremely passionate about playing guitar. Subconsciously, it makes them feel that he has a strong mindset and long-term commitment to stick to what he likes. Moreover, they feel that the guy is an ideal partner because even they’d want a guy whom they can trust to have a long-term commitment.

READ MORE: Guitar Tricks Review – Is This The Best Way To Learn Guitar?

8. Having a guitar in your hand will look cool

Guys who play guitar and carry it around simply look cooler than others. It’s a pretty easy instrument to play and amazing to work with. Guitars are not just helpful in playing, but they’re also helpful in attracting the ladies. Moreover, it’ll give your outfit a cooler look.

9. They believe the guy would be good with his fingers

Watch any guy play the guitar and see how their fingers do magic. Guitarists have fingers that are strong, precise, and fast. It’s normal for the ladies to imagine how strong, precise, and fast the guy would be in the bedroom. It’s a big turn-on for women to watch a guy have such elite control over his fingers. They cannot help but think how his hands would be when he touches her, caresses her, and pleases her.

If you’re talented enough to play a bit of feel-good music, you can definitely make others feel good, including women. If you can make women feel good through your guitar, they’ll associate the good feeling with you. They will then be attracted to you. When you’re making them feel good, they’d want to be around you more. They’d want to know more about you and try to give you more chances to continue making them good.

Therefore, you shouldn’t play any depressing songs when you’re around the ladies. As music is an expression of you, the negative tone can have a negative impact on them. This might cause them to see you negatively. Try your best to keep the music meaningful, happy, and upbeat rather than depressing.

Most guys think that working out is the go-to activity when you’re looking to attract women. However, playing the guitar is an even bigger attraction for most women. In fact, a study published in Sage Journals showed that women find men carrying guitars more attractive than men carrying gym bags.

Carrying a guitar and showing the ladies that you can play the instrument is a big turn-on for them. It works most of the time. It sparks an inner desire in them that the guy would be capable of emotions and entertain them with music.

12. Guys who play guitar appear smarter than the average crowd

Guys playing guitar have a significant edge over people who don’t play the guitar. Subconsciously, guys who play guitar seem smarter and more intelligent than the average crowd. While playing guitar is easy if you’re an expert, it isn’t the easiest thing to pick up.

Initially, you’ll have trouble playing the guitar. You’ll need to be smart and learn all the chords and melodies. This is why most guitarists are pretty smart and have to know a lot about the instrument when playing. They should know when to press what, which part makes which sound, and more. All this seems like very attractive to women.

13. Musicians are always soft at heart

Most women who date musicians never have gloomy days. Musicians love playing music and singing for their special someone, which makes them very happy. If you’re a guitarist, you must sing for your partner when they’re feeling low, as the romance will take them out of this world. They’ll be overjoyed and ecstatic with your performance.