How To Bias A Tube Amp: Step-By-Step Method To Bias A Guitar Amp 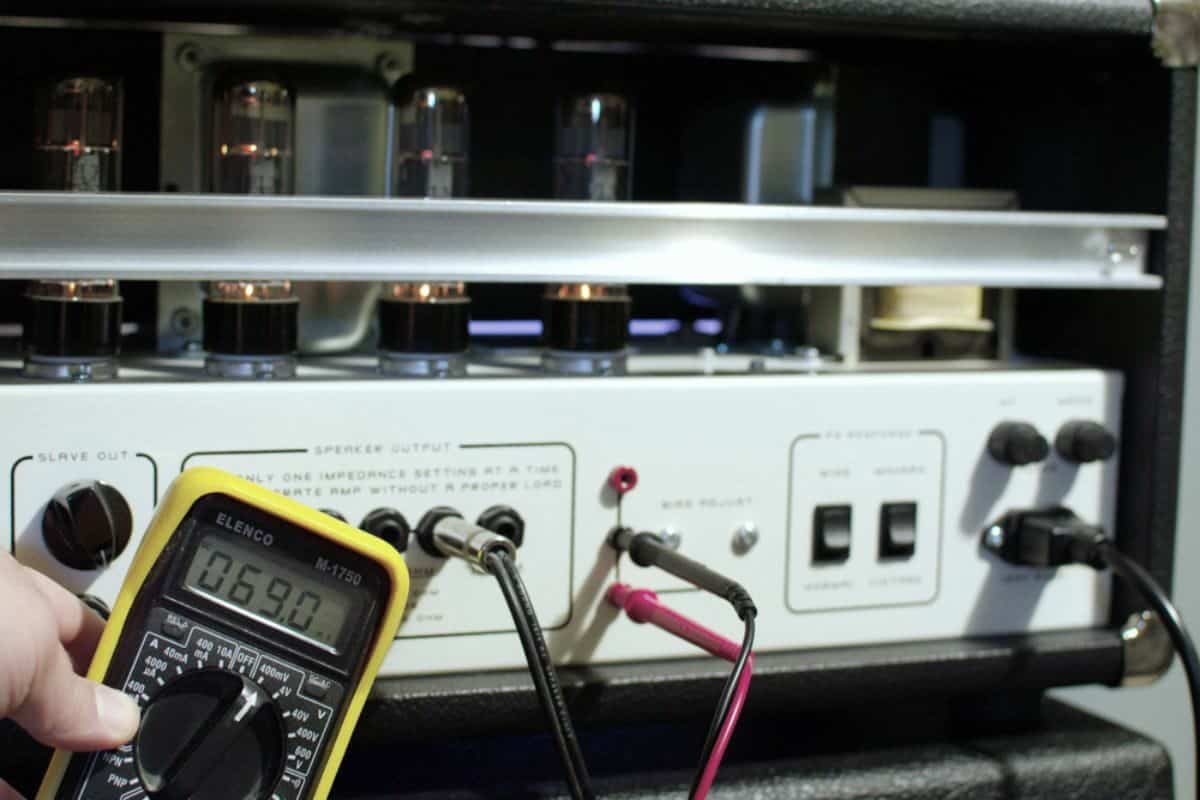 Are you trying to set up a tube amp, but aren’t quite sure how to bias a guitar amp? If so, then don’t worry because you’ll get to know all about it here.

In this article, you’ll get to know about bias in guitar amps, how to bias a tube amp, why is tube amp bias important, how to adjust bias on tube amp, and more.

Before getting to know how to set bias on tube amp, it’s important to know what exactly is bias. Bias voltage is the voltage difference between the tube’s control grid and the cathode. Bias current, on the other hand, is the number of electrons that flow from the cathode to the plate without any audio signal on the control grid. An amplifier tube will control the flow of electrons running through it. The tube can either completely stop the flow (cutoff) or allow it to flow at maximum (saturation).

For amplifying an alternating current (AC) guitar audio signal, you’ll have to set the tube idle. Moreover, set the no-signal electron flow at a point for keeping it from overheating the tube’s plate.

Normally, you’ll want to set the idle flow in the middle of cutoff and saturation. This will give enough room for the positive and negative voltage of the guitar signal. If the guitar signal is a negative voltage, it’ll make the control grid negative. This repels the negatively charged electrons that flow through the tube, slowing the flow. If the signal is a positive voltage (scarcity of electrons), the grid will go less negative. This results in fewer electrons on the grid for repelling the flow, such that the flow through the tube increases.

When working with fixed bias amps, you’ll have to adjust the grid voltage for setting the bias. For cathode-biased amps, you should change the cathode resistor value for changing the cathode voltage and adjusting the bias.

Why is tube amp bias important?

In simple terms, having the correct tube amp bias ensures that your power amp valves are running at their optimum. This ensures that you’ll get the best possible tone out of them as the tubes are getting fed the right voltage according to the valve’s resistance. Correctly biasing the amp means that one set of valves can have a long life as they’re running at perfect temperatures.

If you do not bias the tube amp correctly, you’ll face these scenarios –

How to bias a tube amp?

As you’re turning up the bias and flowing more current through the power tube, the demand on the power transformer and rectifier cause the plate voltage to drop. You should calculate the bias percentage after each bias pot adjustment and then sample the amp’s clean and overdrive tone.

How to adjust bias on tube amp?

Here, you’ll get to know the detailed process of how to adjust bias on tube amp to get the best sound. Remember, fixed adjustable bias amps come with a trimpot for the bias adjustment. Remember to check the model’s manual for determining if this process can apply to your amp.

Matched tubes will be important in vacuum tube power amps. Without having a matched set, it wouldn’t be possible to get proper bias. This can often result in one or more tubes not operating properly. It can also run too hot or even red-plate, which damages the tube and possibly the amp. Go for matching tubes that use state-of-the-art equipment designed and built for matching tubes used in guitars and audio amps. With a precision-matched set, you’ll be ready to bias your amp.

In fixed adjustable bias amps, the bias will be set using a trimpot. The potentiometer will work similarly to a volume pot on a guitar. However, it controls the level of negative voltage in the amp rather than the volume or tone of the signal. Instead of just adjusting the pot with a knob, the pot will have a slot for a screwdriver. For accessing the bias trimpot, the amp usually needs to be disassembled.

This requires removing the chassis from the cabinet or, if you’re lucky, removing a back panel on the amp. You should check the manual and then inspect the amp before removing the hardware for determining the correct way of accessing your amp trimpot.

Even with the amp unplugged and powered off, dangerous voltages are still present in the circuit. Electrolytic capacitors potentially hold charges for indefinite periods of time. You should treat the internal circuitry as if it is holding a lethal charge unless you know that it’s safe. This will involve avoiding contact with any internal components or wiring.

Yes, it may look wonderful in your amp, but you shouldn’t touch it. If there is any situation where you’ll need to touch a component, precautions should be taken. To reference a schematic, identify the capacitors that hold the charge. These are normally electrolytic capacitors in the power supply, or they’re connected to power somewhere else in the circuit.

However, any capacitor can hold a dangerous charge. When using a discharging tool, you should safely discharge all the capacitors. Before you make contact with the component, use a multimeter for taking a voltage reading for ensuring that no voltage is present.

Now that you’ve gained access to the internal circuitry of the amp, the bias meter needs to be connected. A bias meter is essentially a device that measures the current in a tube amp. It makes use of a set of probes plugged into the tube sockets, and the tubes then get plugged into the probes.

This will allow the meter to jump into the circuitry of the power amp without actually needing to disconnect any wires or components. The bias of the tube amp will be measured in milliamps, which is a unit of measurement for electric current. An amp with two tubes will only require two probes. While uncommon, an amp having a single output tube and a fixed adjustable bias will only require one probe.

After having the bias probes and tubes installed, you’ll have to set up a multimeter for measuring the plate voltage. You’ll be doing this directly on the power tube sockets. In some cases, you’ll have to flip the chassis over. You can use the sturdy wood blocks for holding the amp up and level when flipped over. Ensure that the amp is in a steady position so that it doesn’t shift or fall over when working on it.

You’ll have to carefully prepare the amp so that you can start the measurements. Ensure that the multimeter is set to the right volts DC range. If the meter has a range covering 300-600V, this will work for most tube amps. If you aren’t certain, you can set it to the highest setting. Then, work your way down once you start getting the readings. You’ll need to turn down all the volume controls on the amp to zero. Then connect a load to the output of the amp. You’ll be using a speaker for the output load.

Some people prefer using a dummy load. As long as the load is matching the output impedance and has a power rating greater than the amp power, it’ll be fine to use. You wouldn’t be using it for sound, so you shouldn’t worry about the quality of the speaker. Ensure that you double-check the connections such that no pins are bridged. Moreover, double-check that the chassis has securely positioned on the bench top. You should be sure that you keep the hands and tools clear of the amp. There will be high voltages, sometimes close to 500V, in the circuit. You should plug in the amp and then turn on the power.

Once you’ve got the plate voltage reading, you’ll take the reading over to any decent bias calculator to determine the bias current. You can start off by using the 70% bias point, which is a common setting for the bias.

Meanwhile, 60% is also another common choice. You also have the option to adjust the setting in the future if you aren’t certain. But for now, 70% would be a great choice for now. For EL34 tubes having a plate voltage of 456.6V, you will see the bias point to be 38.33mA. Different tubes and different plate voltages will normally result in different bias points. You’ll then have to locate the bias adjustment trimpot and then set it for 38.33mA using the bias meter.

The bias trimmer will be labeled on the PCB and comes with many nice features. The labels will show the direction to turn the trimpot for increasing/reducing the bias current. This will be somewhat uncommon, so if the amp doesn’t, you can turn the bias trimpot a bit in one direction or the other way for determining how to increase/decrease the bias.

For this particular part of the process, safety will need to be the main priority. You should keep your hands and tools clear of the circuitry in the amp. Meanwhile, the metal of the screwdriver will be conductive so you should keep it only on the plastic handle. You should be careful that you only touch the screwdriver to the adjustment slot in the bias trimmer. Many people prefer using the “One Hand Rule” when working on the live circuit. This will involve keeping one hand in your pocket. This will allow you to avoid contact with a grounded surface like the chassis of the amp.

You will be making small adjustments to the bias trimmer and moving your hand away from the amp. Then, you should check the bias meter. You’ll be repeating the process while making minor adjustments until the bias matches perfectly the bias point from the calculator. Once the bias point is finally set, you’ll observe it to ensure that it isn’t drifting. Small fluctuations will be normal. You are only ensuring that it isn’t dramatically rising or falling. Depending on the tolerance of different parts used in the amp, the bias could be slightly different for each tube. In such situations, you should set the highest number to 70%.

This step isn’t necessary, but you could connect the amp to a scope. This way, you’ll get the correct curve form as you’re getting close to the correct bias point. When you’re satisfied with the bias settings, you’ll power down the amp and then unplug it. The tubes will be hot, so you will have to allow them some time to cool down before touching them. Once they’ve cooled down, you should remove the bias probes and replace the tubes in the sockets. Finally, you should carefully reassemble the amp, keeping in mind that the capacitors may still hold a charge if they haven’t been manually discharged.