How To Connect Electric Guitar To Amp: Know All About Plugging And Unplugging The Guitar To An Amp 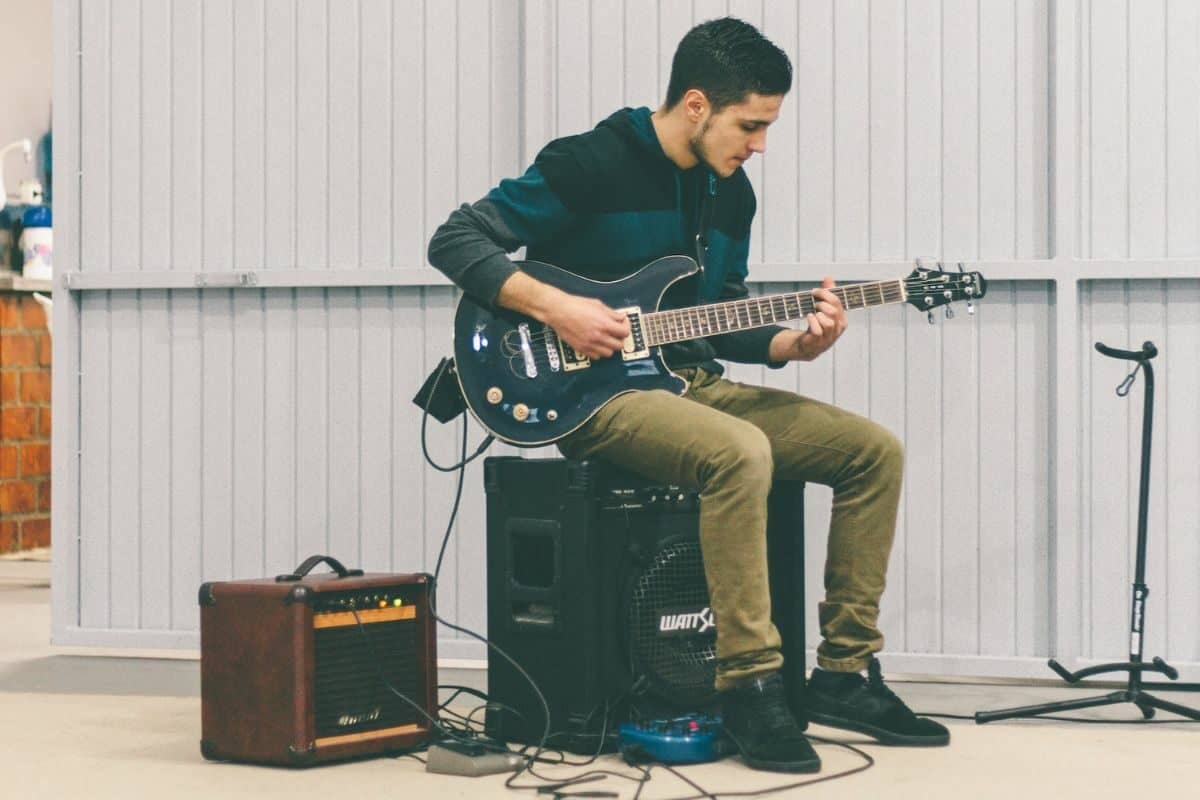 In this article, you’ll get to know all about how to connect electric guitar to amp, how to plug a guitar into amp, how to unplug the guitar, and alternatives to using an amp among others. Continue reading to get all the answers you’re looking for.

Playing the electric guitar is definitely a fulfilling hobby that requires patience, time, and dedication to master. Amps are an important piece of equipment that’ll allow you to make sound with your guitar. While many traditional amps come with the equipment called the head and cabinet, combo amps offer technology contained in an easy-to-use piece of equipment. You can either connect your guitar directly to the combo amp. You can even connect it through pedals for getting different distortions. Both of these methods are very simply and user-friendly to use.

How to connect electric guitar to amp

Method 1: Connecting the electric guitar directly to the amp

Connect the amp’s power cord to the wall

Before the amp projects sound, it’ll require power. First, you’ll need to ensure that your amp’s switch is present in the off position. After that, take the power cord from the back of the combo amp and plug it into a wall socket. Once it has been plugged in, flip the power switch for testing if its power is on. On many amps, there will be a red/green light designating that there is power running to the amp.

Plug the guitar cable into your guitar

You can purchase a guitar cable at any music store. Guitar cables are normally called instrument cables or a 1/4″ cable. These cables will come with a plug that fits into the input jack on the combo amp. This is what will allow the guitar to play through the amp’s speakers. The guitar’s jack needs to be on the front of the guitar or the edge of the guitar. It’ll look similar to a metallic socket.

Turn the volume and gain on the amplifier down

Then, you should turn down the volume and gain. This will prevent any feedback, while also stopping you from blowing out your speaker when you’re plugging in your guitar.

Plug the cord’s other end into the input jack

Now, take the other end of the guitar’s cable and plug it into the input jack of the amp. Your guitar needs to be directly connected to the combo amp with the instrument cable.

Turn the amp on while turning the volume and gain up

Test other knobs on the combo amp

Test other knobs on the electric guitar like bass, treble, and mid-knobs. Start the knobs off in the 12 o’clock position for giving your guitar a great default tone. After that, start adjusting the different knobs and then play the guitar until it has reached the sound you desire.

Your combo amp might already come with built-in distortion like overdrive. Then, test out different features of the amp. If your tone isn’t thick or full length, you can experiment bringing up the amp’s bass knob. If the guitar’s tone is too muffled or muddy, turn down the bass and the mid while increasing the treble. All amps are different in their own way. There isn’t any particular preset that you’ll be able to use on all the amps.

Method 2: Hook up the guitar pedals

Plug the pedal into a power source or use batteries

Many pedals come with replaceable batteries so that you don’t need to plug them into an outlet. They’ll also be equipped with an adapter, allowing you to plug the pedal directly into the wall. Ensure that the batteries are charged on your pedal or that it has been hooked up to a power source.

Connect the guitar to a pedal using an instrument cable

Plug the guitar cable into the front and side of the electric guitar. Then, you’ll be able to take the other end of the cable before plugging it into the input jack on the guitar pedal.

Plug the instrument cable into the output jack of the pedal

Take another instrument cable and then plug it into the output jack on the pedal. If your guitar pedal is on the pedalboard, ensure that you have a long enough cord for reaching the amp.

Take the cable that is hanging from the output jack of the pedal. Then, plug the other end into the input jack of the combo amp. This completes the connection and allows your guitar’s sound to get distorted before it has reached the amp.

Switch the combo amp on

Find the power switch for the combination amp and then set it at the on position. Ensure that the amp is plugged into a power source before you do this. Then, check the gain and volume knobs on the amp and pedals before turning the amp on. Ensure that the knobs are turned down, or you might get feedback when plugging in your guitar.

Test the guitar pedal by turning it on and off

You can turn the guitar pedal on and off by simply pressing it down with your foot. There needs to be an indicator light that’ll look similar to the indicator light on the combination amp.

When you’re working with multiple pedals, you’ll be able to connect them together for creating different effects. Do it by connecting small instrument cables from the output of a pedal into the input of the next pedal. Chain pedals like this to create different types of sounds or to have different effects at your fingertips. Common pedals will include reverb, tuner, blues, overdrive, and loop pedals.

Follow the correct framework and order when using multiple pedals

How to plug an electric guitar into an amp and unplug it?

How to plug guitar into amp

How to unplug guitar from amp

If you don’t treat the amp properly, you’ll end up ruining quickly. Loud “pop” sounds could be unpleasant to the ear, while also damaging the amp’s speaker. Following these steps to plug and unplug the guitar from the amp will keep you away from any unnecessary trouble.

Alternative ways to using an electric guitar to an amp

Play the electric guitar with a Mac or PC

An easy way of playing electric guitar without connecting an amp would be to use a PC or Mac. With an audio interface, you’ll be able to play the guitar with headphones or speakers through your PC or Mac. An audio interface is all you’ll require to get started with your home recording studio.

If you aren’t interested in recording guitar, you’ll still be using an audio interface for accessing the guitar tones and effects, using software like BIAS FX, AmpliTube, or Line 6 Helix Native. You should just plug your guitar in and open any guitar modeling program like BIAS FX 2. I’ll allow you to access different amps and effects.

You’ll have access to the amp and effects tones that you want without needing to purchase any amps or pedals. It’ll be hard to emphasize how useful it’ll be to be able to plug the guitar into a PC or Mac and use software like BIAS FX.

Play the guitar with speakers

One of the reasons you’d want to know alternatives to amps is if you already have an amazing speaker system. Maybe you might have got an amazing stereo or surround sound system and want to use speakers instead of purchasing a costly guitar amp. A great alternative to consider if you want to use a set of speakers for playing electric guitar will be the Line 6 AMPLIFi TT. The AMPLIFi TT is designed for offering an easy way of playing an electric guitar through the speaker systems.

You can plug your guitar into this device and plug the AMPLIFi TT into the speaker system. It’ll handle the guitar tone while allowing you to craft tones using different amps and effects models using the smartphone.

A PC or Mac will give you amazing flexibility in terms of accessing different guitar amps or effects software. However, using an Apple iPhone or iPad for playing the electric guitar will be a decent option too. There are many great guitar apps that can be used on an iOS device. BIAS FX and AmpliTube are two amazing amp and effects modeling apps that’ll give you access to a huge range of guitar tones. You can even use an iOS device for recording your guitar, which can be quite handy for songwriters. For playing an electric guitar using an iOS device, you’ll need to plug in your guitar.

There are many options, but the easiest one is to use an iRig HD 2. The benefit of using the iRig HD 2 would be that it’ll come with the full version of AmpliTube 4. This way, you’ll be able to use it for all the amp and effects tones. Once the guitar is plugged in, you’ll be able to connect the speakers or headphones to the iRig.

Troubleshoot tips when plugging your electric guitar to an amp

First, you’ll need to start off with the basics. Check if your amp you’re plugged into is turned on. If you’re using a mixer, ensure that it isn’t muted and that the cords are plugged in all the way.

Then check if the amp/cable is working with other guitars? Always ensure that the amp is working and the cables are in a great working condition. If possible, plug in another guitar to the same line and see if it’s working. If you don’t have another guitar, plug the cable into the amp, and then turn the volume up slightly. Touching the end of  the cable with your finger is making a loud hum noise. This will tell you that the amp and cable are working.

Check if you are having new batteries in the guitar. If you have a 9V-powered Expression System, an ES-N or an ES-T system, there needs to be a red battery indicator light inside the guitar. It’ll be mounted on the edge of the preamp and light up when a cable is plugged into the guitar. If the light isn’t appearing, chances are that you’ll have a dead battery or the battery has been installed backwards. Look closely at the battery holder to ensure that you’re lining up the small “+” tab with the small notch of the holder.

The older versions of the Expression System will take 2 AA batteries. If only one battery is coming out, the second battery might be stuck inside. Do your best and get it out by shaking the guitar or by grabbing the tip with needle nose pliers. Use two brand-new batteries and then put them in a flat end first. You must, don’t mix old and new batteries together. The old one could heat up and might leak acid, which damages the battery housing.

Now you’ve checked the cables, amp, and batteries, and the indicator light is on, but there is still no sound. Then, there is another thing that you should check out. The ES-T, ES2, and ES-N have a small phase switch near the battery light. If the switch gets stuck in mid-travel, it’ll kill the output. Reach into the sound hole and then flip the switch to one of the ends and try again.