How To Test Guitar Amp Tubes And Diagnose The Bad Tubes 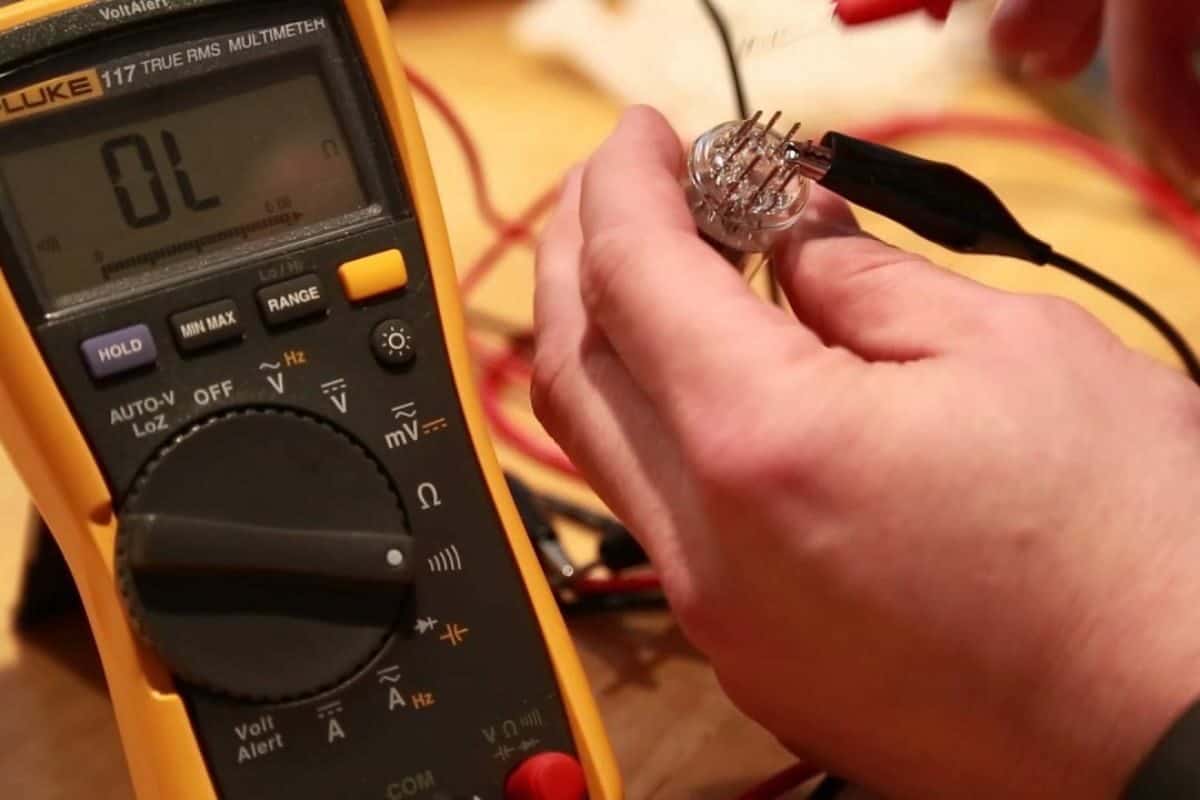 Is your tube amp giving you trouble, and you’re looking to test the tubes for possible issues? If so, then you’re in the right place.

Testing guitar amp tubes is a simple procedure that involves finding out the root of the issue and fixing it. You must first understand why your tubes have gone bad and then diagnose the issue.

Nothing can beat the true analog sound of an authentic cranked tube amp. Most guitarists love tube amps due to the harmonic structures and sound of the overdriven amp. The wonderful feeling when you’ve unearthed the sweet spot and the tubes are creating magic, belting out warn tomes. But suddenly, something goes wrong and things don’t sound right anymore. You’ll be left asking yourself how to tell if guitar amp tubes are bad and how to test guitar amp tubes.

The problem is, not everyone has the luxury of having a tube tester. This leaves most people in the dark about the amps diagnosis and treatment. Even if you had a tube tester, it isn’t capable of painting a crystal clear picture of the problems. Basically, pre and power tubes are a bunch of fragile components that get concealed in a vacuum-sealed glass chassis. Their length of service will hinge on many factors. Some of them range from the level of maintenance, road travel, wear and tear, vibration from the speaker, and more.

Symptoms for how to tell if an amp tube is bad

The symptoms of bad pre and power tubes are –

How to tell if guitar amp tubes are bad

For starters, you’d want to identify any visible signs of bad tubes before you book an appointment with a technician. Here are some of the pointers on how to tell if tubes are bad in a guitar amp.

Luckily, it’ll be easy to visibly identify what a bad tube looks like without needing a tube tester. Within the tubes, there’s a heater filament and when working optimally, it’ll illuminate with a satisfying warm orange glow. The filaments when glowing will emit electrons at high temperatures that produce heat for the tube, which will be required for maintaining the amp’s optimal tone.

Depending upon the manufacturer, other types glow brighter than others. The main part will be if the filaments are glowing equally and to a decent level. This means that they’re working and passing the first part of the visible test. In case a filament fails to glow, it is referred to as “filament failure” and it’ll need a replacement. If an individual tube glows less brightly than the others, it’ll mean that it is worn down and isn’t functioning optimally, which also needs replacing.

Notice the illumination color of the tubes

A purple or violet glow on the inside of the components looks pretty. However, it’s a clear indication that there’s a leak somewhere in the tube. If spotted, you should replace it immediately before you attempt to use the amp again. For maintaining the optimal function, the tubes will require an airless sealed vacuum. An air leak in the tube will generate positive icons, which causes ionization in the components. Although this might look good, it’s damaging to your amp’s health.

Not to be confused with the purple/violet glow, which is common, a bright blue fluorescent glow will be the opposite. It is a sign that your tubes are healthy. Nothing to fear though, this is a common side effect of a normal functioning tube.

Pink will be a sign that the tubes are having too much gas content in the vacuum. This is caused by excessive grid currents in the components.

An important aspect that most guitarists overlook with their tubes is constantly checking the condition of the getter. A getter is essentially a silver or light gray metallic material used in sealed systems, including vacuum tubes. They’re positioned near the top housing of the tubes. Moreover, they can also be coated by the side and bottom in other types. The point is that their condition indicates the health of the tubes and reveals potential defects like a slow air leak.

A getter having a silver or gray color will include a healthy tube. It can range from light gray to metallic chrome, which is fine. Remember that a black getter isn’t a burn mark or a hot spot, which many guitarists mistake it for.

There isn’t any need for replacing the tubes. This is basically a by-product of the flash getter. What requires your attention is a getter having a pure white finish. This will be an indication of a leak in the vacuum. If you’ve spotted this, go ahead and replace your critter with a fresh tube.

Look for any red plating

The hot spots or burn marks inside the glass will be a sign of red plating. This happens when the tubes are glowing a constant red even when the tube amps are on standby. This is normally when a power tube is producing excessively much voltage. With that, excessive heat will scorch inside the glass housing. You must immediately replace it with a fresh one, since you’ll be removing the faulty one. It can be caused by a faulty transformer or by other problems with the amp’s circuitry.

If your amp tubes appear healthy and pass the visual tests, then it’ll be time to bring out the tap test. Technically, this will be more of an audible test than anything. However, it is still the standard when hunting for the pesky tube that has failed you.

It’s simple. You should take an object like a pen or pencil and tap each individual tube. Carefully listen for any inconsistencies in the sound. A faulty tube is likely to sound duller than other sounds, or it’ll sound as if it has components rattling inside. This is an indication that the amp tube has failed and requires replacement. Remember, it is rare that multiple tubes will need replacing at the same time.

The simple answer to that is yes. When a pre or power tube starts weakening, it’ll lose its voltage and performance. This causes a major loss in volume, even resulting in sudden random volume drops or fade-outs when playing. Weakening tubes will also affect the frequencies that your amps can produce. It’ll widely degrade the tone, which gets interpreted as volume loss.

A common example can be your amp losing the low frequencies. This results in a loss in the bottom end, resulting in a thin, tinny sound. If your amp hasn’t had a tube change, then the first protocol needs to be to replace the bad tubes.

Usually, power tubes will be the first to go, as they have a lot more fragile components. These will run at higher voltages and are responsible for the bigger job of amplifying the speaker’s signal. Preamp tubes, on the other hand, will be more reliable. They’re compact and tasked with amplifying the guitar signal to the amp using less voltage. This means that they wear out less frequently compared to power tubes.

How to know if the tubes are overheating?

The fact is that amp tubes normally generate a lot more heat, meaning that they’re working fine. It’ll be difficult to tell when tubes are genuinely heating, as all amp and tube combinations are different. Moreover, they run optimally at various perimeters. Most amp tubes optimally run at a range of 150°-250°, giving you a fair amount of variance to work with. Some guitarists worry about the heat generated from the tubes, pointing at a fan at the back of their open-back amp for cooling them down. However, it isn’t recommended, and neither is installing an internal fan. Blowing cool air on your tubes will mean that they’ll need to work harder to maintain the operating temperature.

Secondly, do you know why it’s said that you shouldn’t pour boiling water on a frozen car window on a winter morning? This is because you’ll end up cracking the glass. This is referred to as “thermal shock” and for the tubes, the same principle will apply, but in reverse.  If you try to cool extremely hot tubes quickly, it can strain the glass. Moreover, it’ll weaken them, which will likely cause a leak in the sealed vacuum and result in a leaky death.

The reality is that the amp is normally designed to withstand heat in most situations. For instance, rehearsing and performing on a humid stage, playing in the bedroom, and more. With that said, it is recommended that you should get a fan for the amp facing at a 45° angle. It shouldn’t be directly in front of the tubes.

The primary reason why amp tubes get a bit too hot is that they either have too much power or too much voltage running through them. Sometimes, it could even be a combination of both. Remember that the heat coming out of the amp can be from other components too, not just the tubes. However, if it feels hotter than usual, take it to a local technician.

When to replace power and preamp tubes in a guitar amp?

This is often a hotly debated topic in the tube amp community. However, there isn’t a concrete answer, as tubes don’t come with a specific lifespan before they die down. Some tube amp users replace them every couple of years. Meanwhile, others replace their current tubes only after they have died out.

The main reason why you’d want to replace your tubes is with respect to the tone. When you first purchased an amp, you’d have been thrilled with the tone. But over time and after excessive usage, the sound starts degrading and isn’t as sharp and crisp as before.

This change might have been so slow and gradual that you might not have noticed with your ears adapting to the tonal changes. A fresh power tube replacement will give your amp a new lease of life, upgrading the tone to how it was when you first purchased it.

So ultimately, there is no set time when you must replace guitar amp tubes. However, you’ll need to carefully examine your amp from time to time and know about the tubes.

How to test guitar amp tubes

Here are multiple ways how to test tubes in a guitar amp that you should know about.

Test the sound of the tubes