Is Kurt Cobain Left-Handed: Tips And Tricks For Left-Handed Guitarists To Play Like Cobain 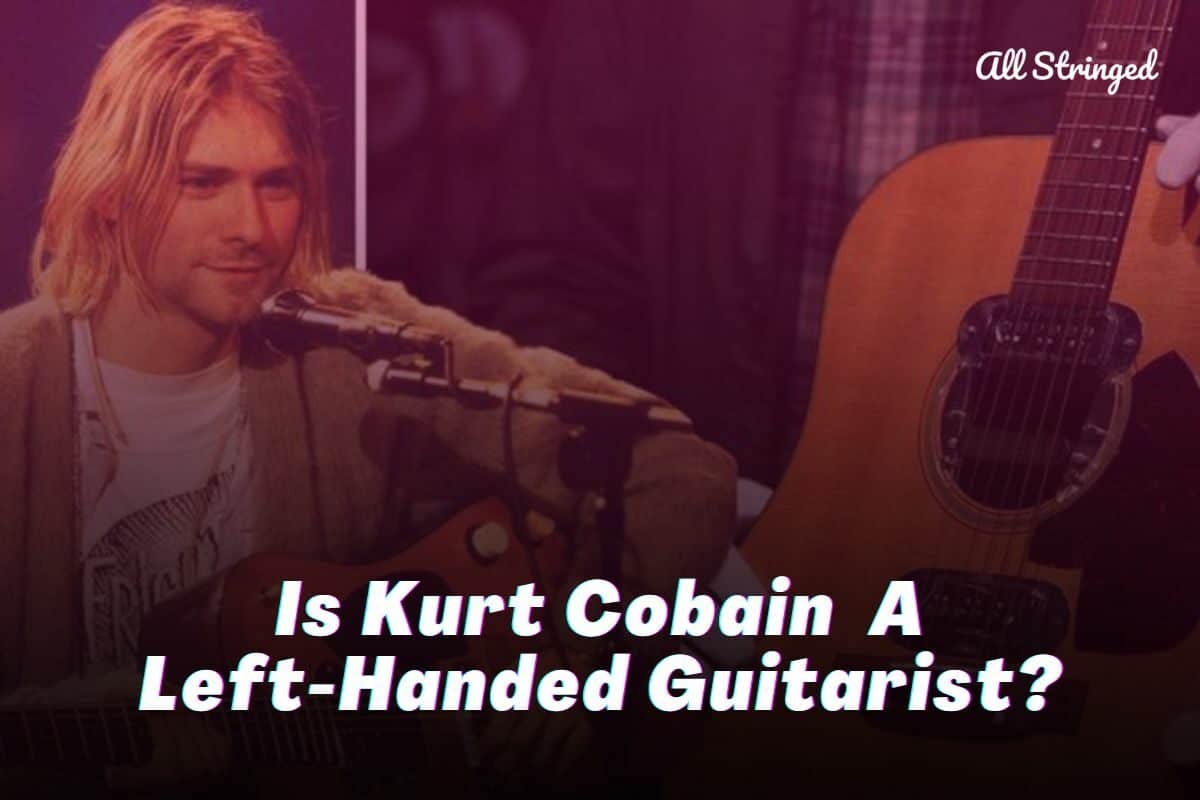 Are you a left-handed guitarist who looks up to Kurt Cobain and wants to play like him one day? If so, you’re definitely in the right place.

Kurt Cobain is left-handed, and he’s popular as one of the most iconic left-handed guitarists. While he was a natural left-hander, he taught himself to play with his right hand. This made him ambidextrous and incredibly skillful.

In this article, you will get to know all about Kurt Cobain’s playing style, is Kurt Cobain left-handed, beginner tips for left-handed guitarists, and other important things to help you out.

Kurt Cobain is one of the most iconic and adored musicians of all time. There is often a debate about him being a left-handed or right-handed guitarist. The truth is, while he was not totally left-handed, he used to play guitar left-handed. He was essentially ambidextrous, which made him highly skillful.

It was often said that he seemed to favor low-end models. To this, he stated that doesn’t favor them, but he can only afford those models. As he was left-handed, it wasn’t easy for him to find high-quality guitars at reasonable prices for left-handed guitarists. Of all the guitars that he used, the Fender Mustang was his favorite, and he owned two of them.

Playing a musical instrument is one of the most popular past times for people around the world. With more than 27 million residents playing an instrument in the United States alone, it’s no wonder so many people wish to learn to play the guitar. But what if you’re a left-hander who wants to learn left-handed guitars?

A left-handed guitar is manufactured so that a southpaw can hold its guitar neck with the right hand and then use the left hand for strumming. Similarly, a left-handed guitar will reverse the placement of features like volume and tone controls, tremolo bars, and switches. This way, the left-handed players can access them and lend more flavor to their playing.

How should left-handed guitarists hold a guitar?

When you first begin learning to play the guitar, using a left-handed guitar will greatly help you. Left-handed players will find it easier to master chords while building up speed and dexterity with the fretboard technique. While right-handed guitarists can use their left hand to finger notes on the fretboard, you may think that it’s normal for left-handed players to excel by training themselves to play a right-handed guitar. However, as you learn more as a guitarist, you’d find that it is your picking hand that becomes more dominant.

If you’re left-handed, your dominant hand will be where the technique comes into play. Meanwhile, your picking hand would be what adds more depth and color to your playing. For that reason, learning to play left-handed guitars for left-handed people opens up new doors. Holding a left-handed guitar will be no different from holding a right-handed guitar. In that situation, you are holding the neck of your guitar in your right hand and using your left hand for strumming. Beyond the simple tweak, here are a few details that you need to keep in mind.

Relax and loosen up your shoulders, arms, fingers, and neck. Staying loose while maintaining a good posture will be key to playing well.

Hold the neck of your guitar

Have a comfortable yet not too tight grip on your guitar’s neck with your right hand.  Keep your wrists free, limber, and loose from tension as it will allow you to easily navigate up and down. Moreover, you should keep your thumb on the back of your guitar’s neck.

Place your fingers behind the fret

When you’re learning to play guitar left-handed, you should use your right hand to finger notes on the guitar. Placing your fingers directly behind the fret gives you the cleanest tone. You should avoid putting your finger directly on the fret; otherwise it may create a buzzing, unpleasant sound. This way, you will not get the proper resonance of the note.

Hold your guitar against your body. Your right hand should rest against the pickguard when you’re strumming or playing individual notes. If you’re playing for a while, most of it will feel natural. The more you practice, the better your strumming skills will be.

If you’re in these categories, you should mentally invert chords and tabs to place your fingers on the correct frets. Using a left-handed guitar made by keeping your needs in mind eliminates the need to seek specific left-handed guitar tutorials.

For a guitarist, the most rewarding thing is to pick up the guitar and play a song. Here are some things to keep in mind when you’re a left-hander looking to learn to play a left-handed guitar.

Get in the right mindset

When you’re learning to play any instrument, getting into the right mindset and habits is one of the sternest challenges. This challenge can be even harder if you’re a left-handed guitarist learning the left-handed guitar. This is the case because the majority of guitar players all over the world play the guitar on the other side. There are many resources and access to information, but most of it is typically for right-handed guitarists.

If you play with a friend, chances are that they’ll likely be playing a right-handed guitar. You should understand this difference and start your journey with the right mindset. This will prove to be the key to your success, but you shouldn’t let any obstacles get in your way. With almost 90% of new guitar players quitting within their first year, it’s even more important to have the right mindset.

Armor yourself with the right tools

Once you’ve got the right mindset, you’ll require the right tools. You can either buy a left-handed guitar or do it the Jimi Hendrix way and restring your regular right-handed guitar.

You can take the route of flipping the guitar over. It suited musicians like Albert King, who had a regular right-handed Gibson and flipped it over. Most regular guitar players are probably looking for something a bit easier.

You can also go the route of restring a right-handed guitar. This way, you’ll be able to use the guitar left-handed and the strings would be the right way around to play. Although flipping strings may seem an easier option than scouring for a dedicated left-handed guitar, you’ll notice a few issues.

Once you have flipped a right-handed guitar, things like input sockets, switches, tremolo arm, and scratch guards will be in the wrong place. You’ll be better off starting the right way and purchasing a dedicated left-handed guitar.

There are many things about your left hand that you should be aware of when playing. It’ll be important for you to relax when you’re playing and be aware of it. If during your practice sessions you start feeling unnecessary stress or tension in your fingers, arms, neck, or back, you must relax. Doing a bit of stretching will help you out too.

Tension isn’t just dangerous for your health, but it’ll also slow down your guitar playing. With your left hand on your guitar, the proper finger placement will be right behind the fret. When you’re playing, if you notice your fingers are in the middle or heading towards the back of the fret, you need to try and move it up until it is close to the fret. This will make it significantly easier to play cleaner and clearer notes.

Listening closely will help you notice when you have incorrect finger placement. In case you hear buzzing on the notes, you should check your finger placement. A lot of the time, making small adjustments can clear up any buzzing. You should remember to keep your left thumb in the middle of the back of the guitar’s neck. This will help reduce the amount of tension that’ll build up when playing.

Key tips for left-handed guitarists to play like Kurt Cobain

Make use of tutorials and chord books for left-handed players

Learning to play the guitar can be difficult enough without having to read upside-down chords on a standard chart. There are many authentic publishers that have a wide range of left-handed instructional materials. These tutorials and books will come in multiple skill levels, and they’re found in both print and audio.

If buying a left-handed guitar is not a feasible option, and you have to make do with a right-handed guitar, ensure that you go to a technician to replace the nut and saddle. If you don’t, your guitar will not fret properly, which means it won’t sound right.

Mind your stance and position when you’re playing