Is Rammstein Gay: Check Out Some Of The Most Controversial Moments Of The German Rock Group 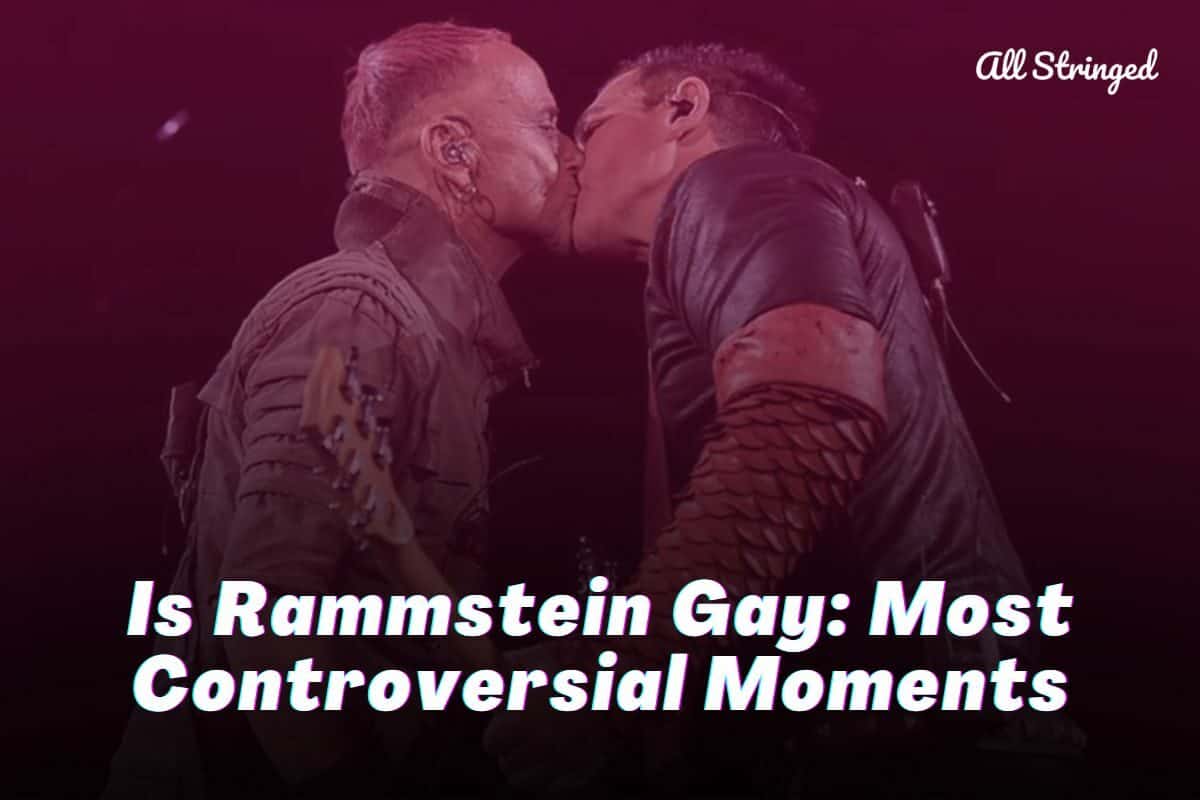 Are you a fan of Rammstein? If so, then you’ve probably thought at some point if the members of Rammstein are gay. In this article, you’ll get to know whether that’s true or not.

Rammstein members might be renowned for their absurd antics and envelope-pushing approach, but they’re not actually gay. They simply love going against the grain as they have opposing political views, which often lands them in controversies.

In this article, you’ll get to know all about this German-based group, some of their most infamous controversies, and the answer to the question is Rammstein gay. Stick around to know all the answers.

Rammstein is a German-based dance, industrial-metal music group. The group is renowned for its absurd antics, rebellious nature, and envelope-pushing approach to overt sexuality. The group often has very strong political views, and it often lands them in trouble. However, one of their scandals involved a kiss between Paul Launders and Richard Kruspe. This has got many people to ask the question, “Is Rammstein gay”. While the band members aren’t gay, the kiss was a statement against the notoriously anti-LGBTQ stance in Russia.

Long-term Rammstein fans who watch all their performances would have watched their infamous Berlin performance. Rammstein members kissing isn’t something new happening in the German industrial-metal crew. However, the kiss took on an entirely new meaning in Russia. On June 30th, 2013, Russian President Vladimir Putin enacted a federal law for the Purpose of Protecting Children from information advocating for a Denial of Traditional Family Values or better referred to as the gay propaganda law. Under this rule, even small gestures potentially carry heavy consequences. If charged, violators can get fined up to 5,000 rubles, detailed for 15 days, while foreigners can be arrested/deported.

Rammstein shared a passionate photo of their kiss via Instagram while inserting the caption “Russia, we love you!” There is no word if the band, especially Landers or Kruspe would be punished for the act or not. However, it wasn’t their first run-in with the law. Back in 1998, singer Till Lindermann and keyboardist Flake Anderson spent the night at a Massachusetts jail. They got charged for simulating sex onstage during the band’s charming number “Buck Dich”. Law enforcement cited it as lewd and lascivious behavior.

Most infamous incidents of the controversial German group

Controversy with the first album art

The titles of their albums, similar to their lyrics, often come with a pinch of double meaning. Not only was there a lot of controversy surrounding the artwork of their debut album, there it was something common throughout their near 30-year career. The release of Herzeleid set the stage for the group’s controversy-laden careers.

The album art in question featured the six members’ shirtless superimposed over a flower. The contrast of beauty in nature, masculinity, and the fragility and delicate cycle of life. The artwork was a bold image of a group forging a path as many were coming out of fractured relationships, which lent the album the title “heartache”. However, most people did not see things that way.

The press referred to them as “herrenmenchen”, comparing their image to the propaganda of Nazi Germany’s “Strength Through Joy” campaign. In general, the German press also called the men supremacists. In the United States, the cover would be swapped for a more straightforward photoshoot.

The group’s lyrics over the years have involved many boundary-pushing themes and topics. In 2004, they selected a powerful lead single for the Reise album in the humorously titled Mein Teil (My Part). The title was the German equivalent of saying “my thingy”, making it a silly title for a dark tale. The lyrics were centered around cannibalism and were inspired by the case of Armen Meiwes. Meiwes got imprisoned for posting a haunting advertisement online. The ad stated that he was looking for a man who’d allow him to remove and consume his sexual organ. While he wasn’t present on the album, the song featured the exact words of the internet ad as spoken word.

While the music video didn’t reflect the entire story, it was still a clear display of dark, violent human emotion. The controversy saw MTV taking down the video from its normal airtime, restricting it from being played before 11 PM.

In their newsworthy career, Rammstein has rarely covered music from others, despite loving many mainstream acts. However, the group ended up surprising their fans in 1998 as they released a cover of Depeche Mode’s Stripped. Naturally, they played around with the idea in a way, making some changes to the chorus line. It was not actually the choice of the song or the song that cause the controversy. In fact, Depeche Mode was a fan of the new interpretation. The controversy was the music video, and it was the group’s first taste with video backlash.

The music video featured footage from Olympia, a documentary about the 1936 Olympics that happened in Nazi Germany. This was an interesting historical study, as the film is credited with pioneering the way sports got filmed later on. The choice of the video and Olympia’s director Leni Riefenstahl’s personal history as a Nazi sympathizer by post-war authorities saw Rammstein getting threatened by the press and the public.

Getting arrested in the United States

Rammstein has been known for shooting fire from the stage, often using stage-ready flamethrowers. However, the group’s most talked-about stage effect is more about water than it is about the fire.

The police of Worcester, Massachusetts believed the former. In June 1999, the performance saw the group spending a night in jail. Meanwhile, each member of the group got fined $200 for lewd and lascivious behavior. This was a massive culture shock for the German band, who still had to learn about America’s authorities and conservatism. Throughout the remaining dates of their tour, Lorenz and Lindemann had to fly back to Worcester repeatedly for court proceedings.

In March 2019, Rammstein released new music after 8 years, coming out with the lead single from their 7th album. The music video for Deutschland was more of a short film, being 9 minutes long. The music video took their storied history of controversial music videos to a whole new level. The video was cinematically shot and took the viewers through an opaque history of their homeland. The video featured the Hindenburg, witch hunts, the holocaust, the Berlin Wall, and more.

Yet again, the German band found themselves swept away into a frenzy. Not only did they dare to cast a black woman as Germania, but the group themselves starred as Nazi oppressors and Jewish concentration camp prisoners. Some believe that yet again, Rammstein was sympathizing with the far-right. Meanwhile, others felt that it was time to learn from mistakes. On the other side, it was believed that they used tragedy for entertainment. Many viewers celebrated the band showing Germany’s history so honestly and ruthlessly.

The lyrics pre-emptively confronted the split in opinion. “Will dich lieben und verdammen (I want to love and damn you)” and “Meine Liebe kann ich dir nicht geben (I cannot give you my love)” were strong and clear statements used in the tracks. Deutschland was an honest look at a country with such a chequered past. Meanwhile, it also adds to the complex emotions that came with warmth from the same soil.

Political discussions are something that has followed Rammstein throughout their storied career. While they have never avoided controversy, there have been a few times they have outright said no to certain accusations. There have been multiple claims of Nazism over the years despite their discography having many songs depicting exactly opposite views.

It comes as a relief for them to be involved in a controversy that only upsets the most close-minded people. During the European leg of their 2019 stadium tour, Christian “Doom” Schneider, the drummer, found himself in a crowd-surfing dingy. He did this while waving a rainbow flag to support LGBT rights. During the St. Petersburg show of their tour where during a performance, Richard Kruspe and Paul Landers shared a kiss. All this sounds very acceptable until it’s mentioned that Russia has strict anti-LGBT laws.

Naturally, this incident outraged many vehemently conservative Russian politicians. In Russia, it’s illegal to produce materials representing non-traditional family and sexual values. The perpetrators commonly find themselves either detailed or incarcerated. Vitaly Miolonov, a member of the country’s lower federation State Durma branded Rammstein members as idiots for this stunt. However, there was no official backlash among the fans.

READ MORE: Guitar Tricks Review – How to Learn Guitar in Less than 4 Months

Getting banned in Germany

Under the gaze of the Federal Department for Media Harmful to Young Persons, Rammstein saw their 6th album (Liebe ist fur alle da) being added to “the Index”. It was deemed a record not fit for the general public to view and consume.

Subsequently, the album got removed from store shelves for extremely violent sexual texts and imagery. There was one image, in particular, featuring a nude woman that did them no favors. The lady was straddling guitarist Richard Kruspe’s knee as he was raising his hands. There were also highly sexual lyrics that proved to be a step too far.

In the subsequent months, the group continued playing the song live but it was only instrumentally. Eventually, any performances of the songs in any fashion got banned. Even the version that didn’t include the BDSM-centric lyrics that caused the initial uproar. During the summer and spring of 2010, the album was freed from its Index prison. Eventually, Ich tu dir weh would end up being a cornerstone for the group’s live setlist.

Thank you for reading. Hopefully, now you know a lot more about the extremely controversial and enigmatic group Rammstein. The German metal band is often rebelling against the norm, even coming up with outrageous ways to mock political stances. One of their most controversial acts involved Richard Kruspe and Paul Landers sharing a kiss during a performance in Russia. This got many people to wonder is Rammstein gay. They’re not actually gay, they did the kiss as a stance against Russia’s anti-LGBT law. This led to massive outrage in Russia, while many authorities publicly condemned the band.