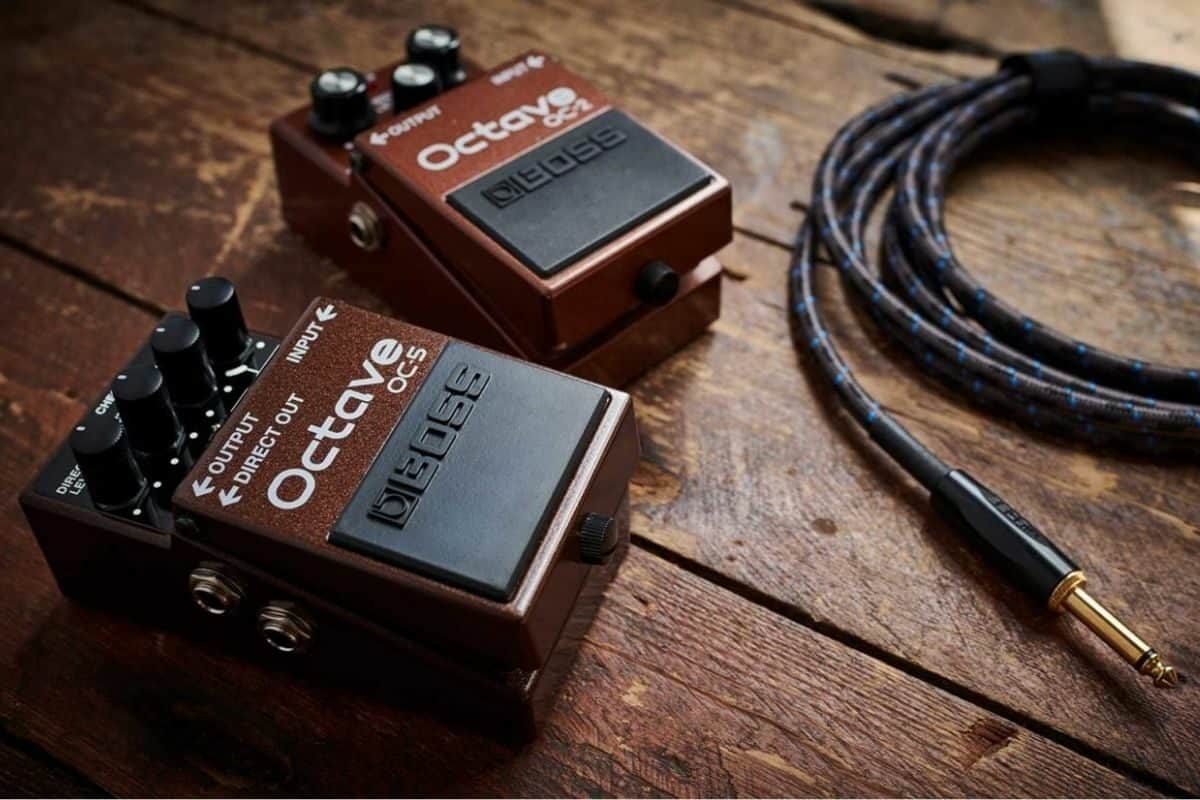 Have you been struggling to get to the grips of using octave pedals and don’t know what does an octave pedal do? If so, then you’re definitely in the right place.

An octave pedal does a great job taking the original sound and adding other signals from different octaves. Ultimately, it can generate a whole new mix and potentially turn your guitar into a bass.

What is the octave effect?

The octave effect is essentially a simple pitch shifting of the original sound, up/down by eight full notes. It’ll be the doubling or halving of the frequency of the sound. This is done by making it higher or lower pitch while maintaining the same notes that are being played.

Octave pedals will offer a mix knob so that you’re able to define how loud each version of the audio sounds in the combined output. The classic choices are generally called octave pedals.

Ultimately, you’ll be able to thicken the notes and create unison harmonies. You can even play  bass on the guitar if you’re looking to fill in for missing band members. The uses will even extend from there into how’ll be able to use the octave to feed into other effects pedals. You can then create more lush and wild soundscapes and tones.

What is an octave pedal?

Octave pedals take the original sound and add other signals from different octaves (higher or lower) depending on your needs. In the end, it can generate an entirely new mix after the adjustments with the desired sounding octave effect. The octave pedal will allow you to completely remove the original pitch and sound of the note.

With these pedals, you’ll be able to apply brightness to the leads or make funky guitar-shredding sounds. Moreover, the notes sound more powerful with richer and fuller sounds. It can easily magnify and synthesize bigger sounds or mid-bass range with lower octaves. Like other types of pedals, octave pedals will elevate your creativeness and offer opportunities to create something unique.

Modern octave pedals feature some interesting controls on them that you’ll be able to choose for shaping your sound. As these units aren’t huge, and the foot pedal takes most of the space, not all the controls can be included in each pedal. This choice will differ from manufacturer to manufacturer and model to model.

With this switch, you’ll be able to control the volume of the direct input sound. By raising it closer to the maximum, it puts your original playing tones into the first plan. Meanwhile, lowering it adds more space for the shifted sounds to be heard.

This control will do the same thing as the previous one. The only difference is that it’ll do that for the desired octave above/below the shifted sound.

Although this control is used for raising the volume of the new product sound, it’ll come with additional options like –

The most common knobs that you’ll come across on octave pedals are the Blend and octave variables. Blend is essentially the same things Dry/Mix. It’ll allow you to determine how loud your pitch shifted signals will be compared to the original. Depending on the pedal, you’ll see a couple of Octave knobs, often called “Sub” and “Upper”. This will give you total control over their inclusion and volumes in the overall mix.

Some of them will feature a “Mode” knob, allowing you to choose between options like drive, polyphonic, oct2, and more. Drive will add the distortion if you don’t want to use distortion pedals or deal with the effects loop. The polyphonic option will allow you to tell the pedal that you’re going to play chords. Meanwhile, oct2 will engage the 2nd sub-octave, enabling you to play deep bass notes.

Different types of octave pedals to use

Analog signals are always continuous, which means there aren’t any breaks in the output sound. The analog octave pedals aren’t that precise during the process of tracing, while it creates slightly fuzzy sounds. Guitarists often favor the analog signals. The fuzziness will add a slight character and warmth, while more importantly output the original signal.

Digital signals are the signals that when represented on a graph, they’ll show as a sequence of different values. The digital signal is generally made up of individual points. However, this is where they’ll be different from analog signals. The output will be a synthesizer that mimics the signal, creating an entirely new waveform.

Some musicians might be seeking a clean octave sound. Digital octave pedals can easily acquire it accurately, as they’re quite flexible when it comes to tracking.

Now comes the question, which type is better, analog vs. digital signals? The answer to this question is that there is no defined answer. Each one of these comes with its unique strengths and weaknesses. However, digital signals often struggle to reach the level of analog signals when trying to capture all the values.

How to make your guitar sound like bass using an octave pedal?

The bass guitar sound can be easily achieved by using an octave pedal if you set them correctly. A bass is generally tuned down one octave lower (12 notes) than the electric guitar. Configuring the pedal down a whole octave recreates the sound of bass using your regular guitar. Depending on the pedal, it can be done by maximizing the “suboctave” control. Then, it’ll kill the “dry” control and eliminate the sound of the guitar’s notes. Moreover, by removing the sub-harmonics from the pedal, you can remove the pitch shifting synth sounds.

Ideally, you’ll want an octave pedal that lowers the root note by an octave while removing/masking the guitar’s original tone out of the signal effectively. Once this is done, the sound that you hear from the amp will be the bass octave lower notes. This will sound more similar to bass guitar frequencies than regular electric guitars and create basslines.

What does octave pedals do?

An octave pedal is an extremely versatile addition to the signal chain. It adds flavor, character, and dynamics to the done depending on how you’re utilizing the octave pedal.

Using octave pedals combined with a simple, boring tone can be adopted for various styles. For instance, you can engage the octave pedal set with the octave down with a bright, clean tone. This combination will transform a once dull, boring tone to play funky lead licks. Another way of adopting a pitch shift octave pedal would be with an ambient pedalboard set. It’ll give sweeping and trance-like guitar swells.

With a clean, tone engaged, you can combine it with a volume pedal, delay, reverb, and other pedals. An octave pedal will help create some ambient and unusual textures while having interesting soundscapes.

Octave pedals when combined with the dirty section (overdrive, distortion, fuzz) can easily give the tone more aggression. It’ll give a new, dynamic edge to the “in your face” sound. Some people would love using an octave pedal with the fuzz pedal engaged to get a screaming lead tone, similar to the Jimi Hendrix style.

How you’re setting up this section depends on the intensity of the dirt section from the distortion, overdrive, or fuzz. For instance, warm lead tone, subtle clean boost, high-gain saturation, mid-gain, and more. Ultimately, this will depend on who you are as a player.

The more distortion you’re using after the drive, the more notes will start sounding additionally colored. It will be ideal to create dark, detuned sound passages and textures. This is only scratching the surface when talking about the tonal variety.

Where to place octave pedal in chain?

Adding an octave pedal to the signal chain will give you the freedom to come up with interesting and creative sounds. If you’re new to creating pedalboards, you would be wondering where to place an octave pedal in a chain. Ultimately, it’s all about the placement, how it affects tone, how to apply it to acoustics, and more.

So, where to put octave pedal in chain?

An octave pedal is generally positioned at the start of the effects chain. It is placed after the tuner and volume pedal and before the drive section. Placing it here will ensure the cleanest signal through the pedal, while allowing the chords and notes to be tracked cleanly and reproduced once the effect is activated. If you didn’t know already, tracking means how well the pedal detects notes through the guitar signal once engaged.

Why the order of placing the octave pedals can be subjective?

The reason here is that the way you’re ordering the pedals will have a significant impact on the other pedals. This will affect the overall tone and sound. This essentially means that the pedal order can be quite subjective to the players hinging on the tone and sounds that you want to create. This will be based on your taste and unique playing style.

This is the reason why being a guitarist can be such a fun thing. You’ll be able to spend hours experimenting with different effects and pedal options. You’ll have the freedom to combine guitars, amps, pedals, effects, and settings to create your ideal sound.

Should the octave pedal be used before or after distortion/drive?

The next question that arises with octave pedals would be whether you should place them before or after the overdrive. This decision is important as it’ll have a big impact on the octave pedal’s sound and functionality. The pedal order has a massive difference in the efficiency of the pedal. This will impact the overall sound when combined with other pedals on the pedal chain. Normally, there are no rules when talking about deciding the pedal order. However, there are certain key areas where the octave pedal should preferably be placed in the signal chain.

Traditionally, the octave pedal should be positioned before any drive or distortion. This is the case because they’ll work optimally when the clear signal starts coming through the unit. This will allow the unit to track notes while reproducing them effectively. It’ll then combine optimally with other effects in the signal chain.

Why placing it “after” distortion isn’t ideal?

Ideally, you’ll want to apply the octave pedals on raw guitar signals such that it’ll effectively track the notes. Ultimately, you’ll need to keep in mind that you should want to distort the octaves and not octave the distortion. Although this can be slightly tricky to understand, but read it a couple of times until you’ve properly understood it.

As mentioned previously, this will be subjective to every individual player. It is recommended that you should experiment with your pedal as much as possible. It’ll allow you to get a winning combination that helps you create the best individual sound.

Should the octave pedal be used before or after the looper?

The traditional and arguably the simplest way of positioning a looper pedal would be at the end of the chain. Being towards the tail-end of the chain will allow the looper to properly record and loop the pedalboard at the present moment.

The octave pedal needs to go at the start of the signal chain. This will allow the notes to track much more effectively. Both pedals must be far apart from each other in the pedal chain, as they normally differ in function. The looper will record the signal as a whole, whereas the octave pedal will interpret and reproduce the guitar’s notes individually as you’re applying octaves and pitch shift effects.