Where To Put Compressor In Pedal Chain: Know The Golden Rules For The Pedal Chain Order 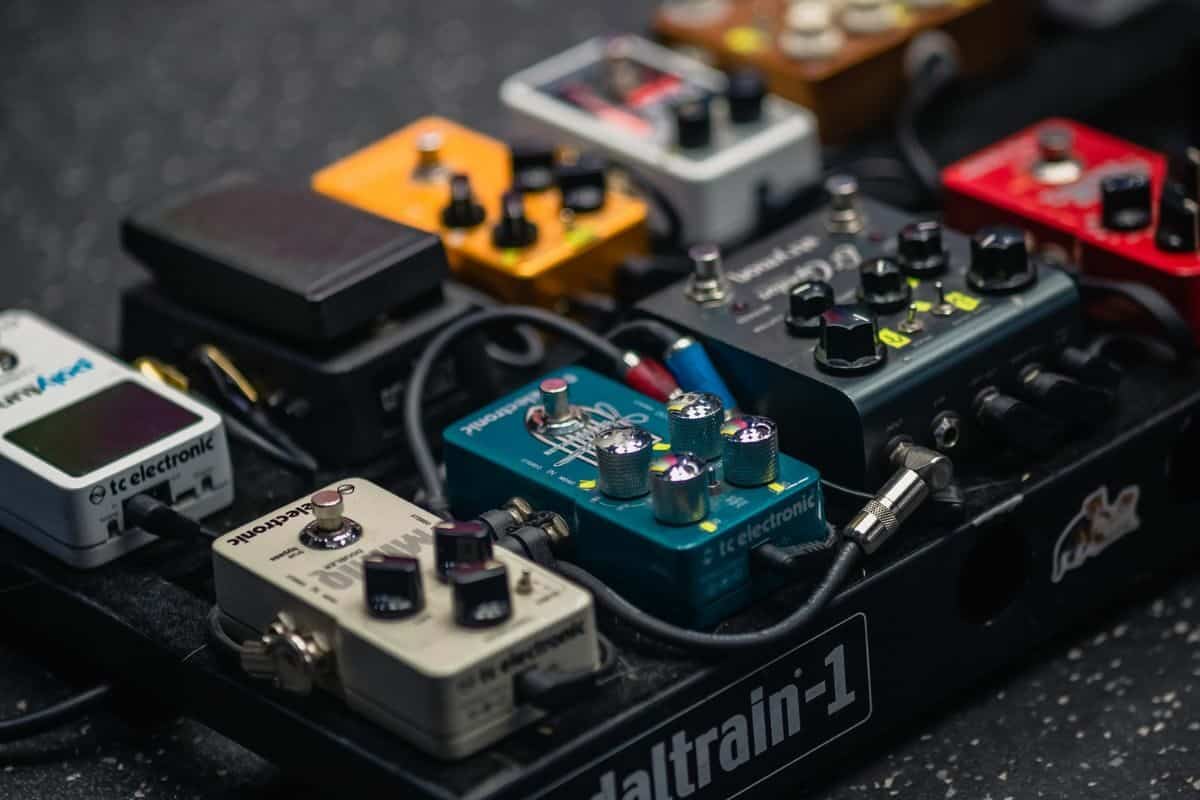 Bought a new pedalboard or created a DIY pedalboard at home but don’t know where to put compressor in pedal chain? Don’t worry, by the time you’re finished reading this article, you’ll have the answers.

Putting compressor in pedal chain in the right order is more important than you may think. Adding it in the wrong order could ruin the sound and make everything muddy. Normally, putting the compressor first in the pedal chain is recommended.

In this article, you’ll get to know all about where to put compressor in pedal chain, should compressor be added first, and golden rules about how to order pedalboard, among others. Continue reading to get all the answers.

Consider the order of the compressor going in the pedal chain

Believe it or not, the order in which the compressor goes in the signal chain is more important than some may think. A general rule of thumb is to place the gain-type effects before the modulation effects. In simple words, add compressors and overdrives before flangers or delays. Another thing to remember is to put the compressor before distortion, overdrive, or fuzz pedal. This is why most expert guitarists place the compressor first to get stronger, better signals to other effects.

There are some who decide to place the compressor last to boost the signal before it hits the preamp. The drawback here will be that any hum produced by other effects will be amplified by the compressor’s output gain. You can easily remedy this by including a noise gate before the compressor. However, noise reduction will affect the tone quality. You can try the best-of-both-worlds approach by putting the compressor first and then using a signal booster before the amplifier. Some guitarists prefer the sound of putting their envelope filter or wah before the compressor to give a wider frequency range. Then there is also the option to experiment.

How does the compressor in the pedal chain work?

Compressor pedal typically comes with one to four knobs for controlling their functions. Here are some of the common dials that you’ll find on a compressor pedal.

First or last: Where to put compressor in pedal chain?

The pedalboard signal chain order is very important. If you’ve spent any time researching and worrying about how to order pedalboard, then you’ll know there are certain myths and wisdom involved. There is a supposed “right way” of arranging the pedals and certain practices that should be avoided. There are certain aspects of wisdom that make a lot of sense.

For instance, if you want to distort the guitar’s sound and apply delay and reverb as you’d want in a studio, you need to place the delay and reverb pedals after the distortion. If you want to use vintage fuzz or wah pedals and wish to retain the interaction between the pedal and the passive pickups of the guitar, you should place the pedals before any buffers. On the other hand, there are some practices that are simply a matter of taste. Do you want the phaser before the overdrive? Do you want the clean boost to add a bit more distortion or volume? Probably the biggest one – where to put compressor in pedal chain?

There are many textbooks about pedal placement that state that apart from wah and fuzz, compression must always be first in the chain. For your typical guitar usage, if the compressor is an obvious effect, then this definitely holds true. Compression reduces the dynamic range of the signal, squashes the peaks, and prevents notes from jumping out of the mix. To get clean sounds, like the ones sued by Country or Funk players, this is what you’ll basically want. You should aspire to get a nice, clean tone without slicing anything.

If this is how you want to use the compressor, it’ll work best if you arrange it first. This is partly due to the next pedal being likely to be an overdrive. Overdrive dramatically affects the dynamics of the signal, clips the peaks, and eliminates the difference between quiet and loud notes. Placing a compressor after the drive will prevent you from bringing out the funky, snappy parts of your playing. This happens because your overdrive would have gotten rid of them already. However, there is another approach that you can take, an approach that comes from the studio.

It’s a common studio practice to plug the guitar into an amazing-sounding amp, stick a mic near it, and record the signal. It’s also pretty common to add compression to the signal after the event. You can either do it as you record or at any point in the mixing process. A studio engineer can preserve the relationship between the guitar and an overdrive amp, while also maintaining a constant volume and presence in the mix. Moreover, they can even add the “everything is better” effect that can be expected from a decent compressor.

You’ll have the option to do the same thing on a pedalboard either by placing the compressor in the FX loop of the amp or by using the compressor after a great amp-in-a-box style pedal. It will result in a “finished” guitar tone that you’re seeking. Moreover, it’ll also give the option for guitarists who want to ride the guitar’s volume control. You will have the freedom to stay in the no man’s land, between the clean and dirty region.

Many accomplished guitarists prefer using this technique instead of using an array of drives and boosts. It is expressive, dynamic, and musical but sometimes, the tone can be a little lost as you’re turning it down. This is where adding a compressor after the drive, preamp, or amp simulator will really help. As a compressor evens out any difference between the quiet and loud notes, it compensates for the volume drops. This is key when you consider the volume drops experienced when cleaning up the tone. This isn’t possible with the traditional compressor upfront.

That way, you will hit your drive pedal hard regardless of how you’ve set the guitar volume.

Moreover, you’ll end up losing the ability to clean up from the volume knob.

Golden rules to remember about how to arrange pedalboard

Volume should be put at the start of the pedal chain. When it’s placed here, it’ll be like the guitar’s volume knob in pedal form. Alternatively, if you don’t want trails from reverbs and delays and want the signal’s decay, put it at the end. It can be pretty dramatic to roll off the heavy guitar parts in a studio-like fade while playing live.

Ideally, the compressor must be before the rest of the signal chain. This way, it can tame peaks while allowing for slight jumps in volume. As compressors work by evening the signal and adding gain, having pedals after them will need the output level tweaking. Once they are dialed in, you’ll be set. Placed in front of drivers, the compressors smoothen the response while delivering a hot signal to the input.

Alternatively, you can even put the compressor at the end of the chain. This will decrease the difference in amplitude between the potential signal paths within the pedalboard. Moreover, it’ll result in a consistent signal level. After all, when you’re recording in a studio, compression will definitely be put on the guitar post-amp and post-mic.

Whammy should be put after compression and before drives. The pitch shifters will mangle the signal and compress it. This means having drives later can clip and smooth the unpleasant artifacts while adding complementary harmonics of their own.

Alternatively, you can put it after delays, which means you can dynamically use momentary effects. A cool trick would be to put a pitch shifter after a Boss DD-3 keeping the time at a minimum while having the feedback on full to get a momentary sci-fi sound effect.

Wah should be put before drives to get a full musical filter sound like Satriani and Hendrix. When it is added before reverb and modulation, move the wah slowly as it’ll result in a phaser-like filter. This can be easily controlled dynamically with your foot to get a subtle, psychedelic motion under arpeggiated sections. Alternatively, you can even place it after fuzzes to get a wild, extreme filter sound.

Preamp should be added before drives and fuzzes. By smashing the input of drives, it’ll result in a clipped, compressed fatter tone.  Alternatively, you can put it after drives and fuzzes for functioning more like a lead boost. In this scenario, it’ll still fatten the sound, but will not increase the clipping or compression.

Fuzz should be added before modulations and delays and after drives. Clipped or compressed signals will make the perceived volume of the guitar comparatively greater. This is the case given the reverb and delays work by creating copies of the signal. Placing distortion after them will result in muddy tones or volume jumps. Placing them before will make the cut-off between the repeats considerably cleaner.

Modulation should be put after distortion and overdrive such that the other effects in the pedal chain are filtered consistently. The sound of something like a flanger or phaser after drive will be extremely powerful. Alternatively, you can try putting a flanger or phaser before drive to get a more subtle effect. This way, it’ll give a sense of movement to your playing, akin to Eddie Van Helen’s stellar solos.

Delay should be put after drives and before the reverb. Alternatively, you can put it after reverb or stack multiple delay pedals in a series to get huge ambient tones. The general rule of thumb would be for clarity, stack a long delay time, and it’ll be longer as you’re moving down the chain. For ambient players, you should start out with a shorter initial time before getting longer from the second delay onwards.

Reverb should be put after delays such that the delay is always clear. The combination of reverb and delay will be great for ambient noodling. However, it can be tricky to use them in a way they don’t end up becoming an indistinct wash.

If the reverb is placed after delay, rolling off the treble on the reverb is sufficient to achieve a huge pad sound. You can even get the ambient tone for clean, atmospheric sections without the reverb being too overpowering.

Alternatively, you can put the reverb in front of your drives or even run it into a dirty amp. The dark tone could be brooding. It is an amazing trick that you can try in the studio if you are experimenting with alternative signal orders.

Thank you for reading. Hopefully, now you know a lot more about compressors pedals, where to put compressor in pedal chain, is it necessary to put it first, the golden rules regarding how to arrange pedalboard, and more. Generally, you should add compressors before putting in delays and flangers. Further, you should also put the compressor before you put distortion, fuzz pedal, or overdrive. This is the reason why most professional guitarists and experts put the compressor first, as they can get better signals to other effects.