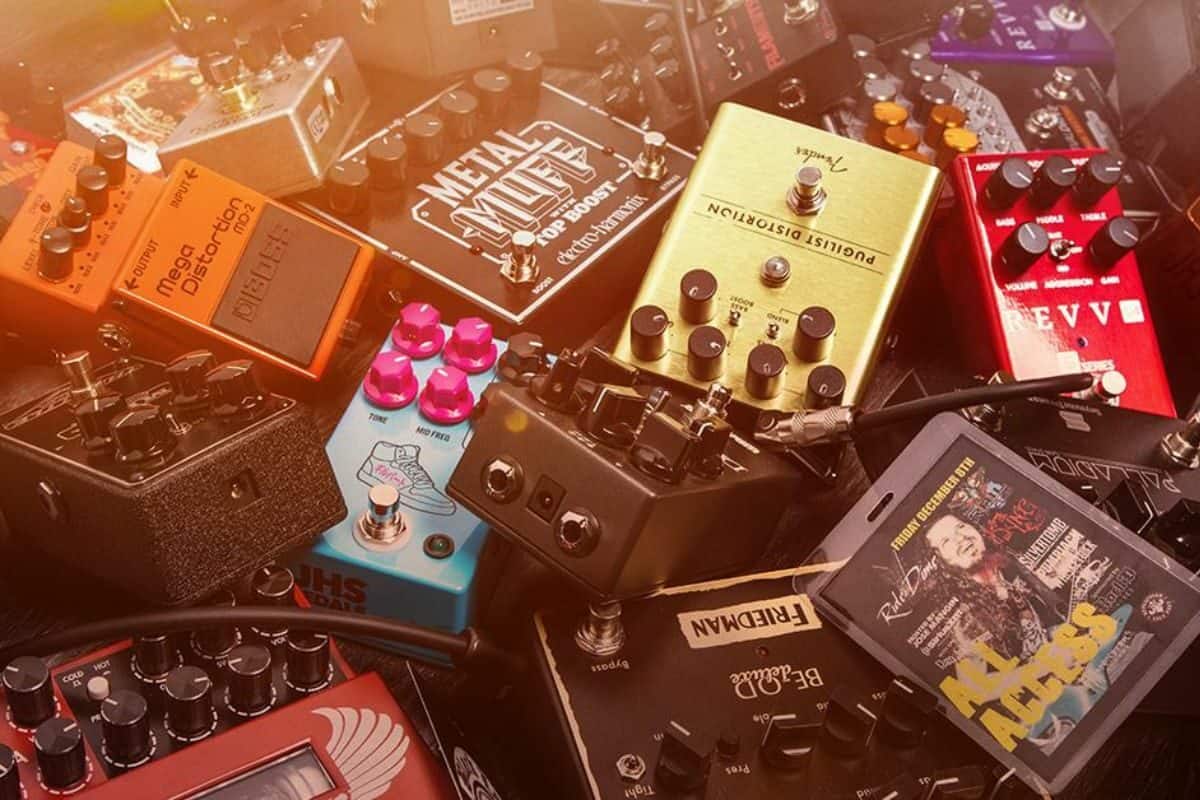 Are you an aspiring guitarist looking to know more about the distortion pedals of your favorite guitarists? If so, then you’re definitely in the right place.

Distortion pedals of your favorite guitarists

Undoubtedly, the sound of the distorted electric guitar has revolutionized popular music. One of the ways of harnessing this sound for yourself is by adding a reliable distortion pedal to your rig. From the early originators to modern trailblazers, the sound of an overdriven/distorted guitar will unleash thunder in a way that’ll make other instruments sound obsolete.

Distortion pedals will be an extremely versatile addition to your pedalboard. Plugging it straight into a clean amp and letting your pedal take care of the gain is a popular option. Some guitarists even put them on top of a dirty amp for taking the situation further into saturation. Some guitarists even run their distortion pedals at the start of the chain. However, it isn’t unheard of for some people to run theirs at the end or in the effects loop.

Why do you need to use a distortion pedal?

Distortion can be used in different ways. It can either be used continuously throughout the song or be placed carefully for a dramatic effect. A common use of distortion will be to transition between calm verses and heavy choruses. As the song approaches the end of the verse, you can kick the pedal at the right moment. The timing will be key for cascading nicely into a chorus section.

The same will apply to soloing. Soloing with distortion isn’t just great fun, but it also sounds incredible. It is even better when bending notes and shredding up and down the neck of your electric guitar. Distortion certainly has a home across multiple styles of music like metal, rock, and grunge. It can easily be found in many places. Like other effects, distortion is also used in many parts of playing the guitar.

Whether you’re a casual guitarist, a recording artist, or a touring musician, you will find a use for distortion pedals. Distortion pedals will be even better if the distortion effect is just what you’re looking for.

What distortion pedal did Jimmy Page use?

For his standard guitar rig, Jimmy Page used many guitar pedals. He was popular for experimenting throughout his illustrious career, and including phasers, fuzz, and delay in his music. The most prominent pedals needed for nailing his sound are the fuzz and the tape delay. Jimmy Page’s rig is interesting because most distortion technologies and effects weren’t available to Page in the 60s. During his best years, he was constantly looking for more sustain and a bit more gain. To that end, he used a Tone Bender fuzz box, which was designed by Roger Mayer.

Equally important for him was his Echoplex tape delay. It didn’t just add the delicious echo effect with organic delay, but it also added warmth through the preamp. He also made use of a variety of wahs and the MXR Blue Box Octave Fuzz.

While Jimmy Page didn’t use much distortion due to the lack of distortion technology present at the time, his predominant weapon was the Tone Bender Fuzz. It was a fuzz pedal made popular in the 60s and 70s courtesy of Jimmy Page and Jimi Hendrix.

In the modern era, there are many clones that do a similar thing, making it easier to emulate his tone. The Tone Bender Fuzz will add a bit of hair and dirt to an already dirty signal. Meanwhile, it’ll compress the guitar sound a bit and give you the sweet, crushed humbucking tone. Essentially, you’ll be looking for a fuzz that isn’t too fuzzy. Then, crank the volume of the pedal for hitting the front end of the amp harder.

Jimmy Page is a legend, a true guitar hero of the highest order. While the vibe and feel for his music might be unattainable, his tone isn’t. Using the same pedals that Jimmy Page uses will help you get as close to his sound as possible.

What distortion pedal does James Hetfield use?

Renowned for its immense versatility, the Egnater Tweaker 40W 1×12 combo is a great choice in the “Sound Like” series. With a valve-powered design, this amp is revered for its distortion ability, authentic tones, and tweaking abilities.

Boosting two channels and a raft of voice switches, you’ll be able to tailor your tone to the finest details. The amp also features an essential 3-band EQ, giving you a familiar control layout. The Tweaker 40W also comes with a vibrant clean sound, stretching to aggressive high gain through its dedicated distortion channel.

The MXR 5150 Overdrive is a high-gain pedal with many essential features that you’ll typically find on genuine amp channels. It’s based on the EVH 5150 amp, an iconic head that has been used by many bands over the years. Adored for its scooped, dynamic high-gain tone, the 5150 Overdrive will encompass the distinctive sound. With a powerful 3-band EQ section, you’ll be able to ensure that it sounds good in most situations.

With a built-in boost circuit, you’ll be able to tighten the overall sound of the pedal. This is similar to placing a Tubescreamer-style stompbox in front of a distorted amp. The overdrive pedal’s noise gate is yet another thoughtful addition. It’ll eliminate the frustrating hiss that occurs when running an ultra-hot amp.

What distortion pedal did Eddie Van Halen use?

Eddie Van Halen was popular for driving his signature distortion tone directly through one of his amps. He typically used the 5150 variants, which could be emulated by clean pedal platform aficionados. In the center of the setup sits the 5150 Overdrive with the Output, Bass, Mid, Treble, and Boost button controls. Wampler Pinnacle is a much-loved pedal that can perfectly replicate the desired tones. It is a frequently recommended alternative to the 5150 OD. It also features the Bass, Mid, Treble, Boost, Gain, Volume, Modern/Vintage Mode Switch, Boost/Gain Mode, and more controls.

If you’re looking for another alternative, you can go for the modern Seymour Duncan Diamondhead Multistage Distortion and Boost. It features the Bass, Mid, Treble, Level, Boost, Gain, and Saturation On/Off controls.

What distortion pedal does Deftones use?

If you’re looking to know what distortion pedal does Deftones use, then you probably won’t find it. This is because Stephen Carpenter of Deftones prefers using his amp for distortion. If you still want to emulate his sound, you’ll want to know the other stuff he uses in his gear. The other gear that he makes use of includes his signature ESP guitar. The guitar comes loaded with Seymour Duncan JB guitar pickups. He even uses the ADA MP-1 preamp alongside a Marshall 9200 Dual Monoblock Power Amp.

As for Sergio Vega, the bassist of Deftones, he seems to be overtaken by Jaguar guitars. He loves the Jag basses as they’re easy to play and sonically, they have great upper mids with a crisp overall tone. He prefers playing with a pick as he can get a lot of attack and distortion. The jaguars give him the desired clear, cutting sound.

All of his basses are stock, and he rotates between three or four a night for covering the band’s tunings, including standard, C, and dropped-C. He makes use of Jim Dunlop’s .50-.110 string sets while using 1mm Tortex Triangle picks. He uses the latter as he remembers reading as a kid that Jason Newsted of Metallica used a similar pick.

What distortion pedal does Dimebag use?

As mentioned before, shortly before his death, he was working with MXR to come up with his own distortion pedal. The idea was to recreate the solid-state Randall distortion in a pedal format. It came with a 3-band EQ and scoop switch to cut mids. Regardless of the amp you’re using, this is a pedal built especially for The Art of Shredding.

It comes with a 3-Band EQ, a lot of distortion, and a mids scoop switch for immediately aggressive distortion. The distortion is custom-tailored for metal attack and heavy shredding. Designed by MXR, this distortion pedal is especially for emulating the signature slicing guitar tone of Dimebag himself. This distortion pedal will take you right into the Razorback territory while bringing in barrels through the loudest mix.

What distortion pedal does Slash use?

Being an old-school type of guy, Slash had some of the classic pedals that have been in the market for decades. A great example of this is the MXR Distortion Plus. It is a rather simple yet extremely effective distortion pedal with only two controls.

There are, of course, a few other pedals that Slash uses to produce his signature sound. At a quick glance, you’ll see that his guitar rid isn’t an overly complicated setup. However, there are a few specific pedals that he is into. If you want to replicate his signature tone, start by including MXR Distortion Plus and Cry Baby into your rig. He also loves the classic Cry Baby GCB95. If Octa Fuzz Pedals are too expensive, or you cannot find a simple fuzz, an octave will do the trick. As for phasers, the MXR Phase 90 is an extremely affordable option. It’ll definitely be a wonderful addition to your pedalboard.

The Cry Baby SW95 is another one that belongs in the category of what distortion pedal does Slash use. It adds a distortion circuit to the wah, and you’ll see two knobs on the side for volume and gain. The distortion can be easily turned on/off by hitting the red switch on the side of the pedal.

What distortion pedal does Jack White use?

Jack White’s musical performances are often characterized by three distinct tones. These tones add interest and variety to the simplistic structure of his songs. Apart from the “bass” line, he also plays the same riff while Kay Hollowbody uses a slide to play mildly, jangly overdriven chords. Meanwhile, he also performs a raucous overdubbed slide solo with ripping distortion thanks to the Electro-Harmonix Big Muff Pi fuzz pedal.

Aspiring slide players should take note. Making use of a distortion or fuzz pedal will give single-note slide lines added sustain and body, while cutting the boosts the guitar tone to the front of the mix. White uses whatever strings his guitar techs include on his instruments. He never has any idea what brand or gauge they are. For the best tone, it is recommended that you should use the heaviest gauge that you can tolerate.

The sustain control will optimize the long sustain with the right amount of harmonic distortion. Meanwhile, the pedal’s tone control will offer a range of sounds from warm bass to crisp treble. From Jack White to Pink Floyd to the Chemical Brothers, everyone wants a piece of the Big Muff Pi.