Easy Guitar Scales – An Introduction To Scales And Modes 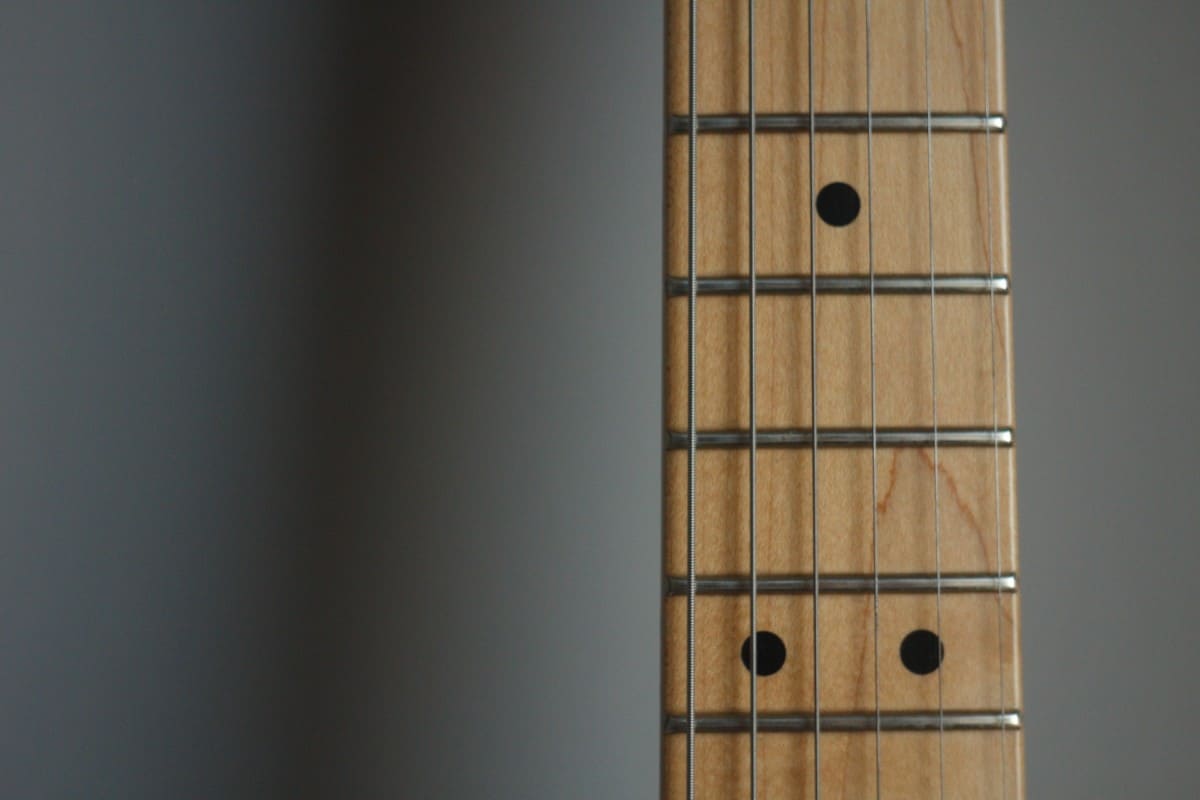 When starting to play guitar, some names for the scales and notes in it seem scary, confusing, and arbitrary. But they don’t have to be! In this article, we will make an in-depth but beginner-friendly review of the most common modes and some easy guitar scales. A quick note before we start: this content is best when read thoroughly, and it has information that will be useful now and later in your learning path, so make sure you bookmark this one for future reference!

This scale is more commonly known as the major diatonic scale. It’s the standard for Western music, and we determine the ‘default’ notes from it. As the chromatic scale has 12 semitones until the next octave of any starting point, this scale uses a pattern of “half steps” (1 semitone) and “full steps” (2 semitones) to achieve the seven notes between every octave we are accustomed to. To see this, let’s take the scale of C major as a reference.

Now, there are many ways of setting this pattern of “half steps” and “whole steps”. These patterns are called modes. There are seven modes in the diatonic scale.

This is the standard mode of the major scale. C Ionian is commonly known as C major for simplicity. Its notes are

Dorian replaces the 3rd and 6th notes from Ionian for their flat versions. This mode has its Ionic relative in the 7th note. Therefore, C Ionian has the same notes as D Dorian (D E F G A B C). Conversely, C Dorian would be

This is a common scale in rock music.

Phrygian replaces the 2nd, 3rd, 6th, and 7th notes from Ionian for their flat versions. This mode has its Ionic relative in the 6th note. Therefore, C Ionian has the same notes as E Phrygian (E F G A B C D). Conversely, C Phrygian would be

Lydian replaces the 4th note from Ionian for its sharp version. This mode has its Ionic relative in the 5th note. Therefore, C Ionian has the same notes as F Lydian (F G A B C D E). Conversely, C Lydian would be

Mixolydian replaces the 7th note from Ionian for its flat version. This mode has its Ionic relative in the 4th note. Therefore, C Ionian has the same notes as G Mixolydian (G A B C D E F). Conversely, C Mixolydian would be

Aeolian replaces the 3rd, 6th, and 7th notes from Ionian for their flat versions. This mode has its Ionic relative in the 3rd note. Therefore, C Ionian has the same notes as A Aeolian (A B C D E F G). Conversely, C Aeolian would be

Locrian replaces the 2nd, 3rd, 5th, and 6th notes from Ionian for their flat versions. This mode has its Ionic relative in the 2nd note. Therefore, C Ionian has the same notes as B Locrian (B C D E F G A). Conversely, C Locrian would be

One Scale fits all Modes

Now, how do we apply what we know from each mode? Actually, it’s very simple! Since now we know the relatives for each mode in the Ionian (standard major) mode, we can change both the root note and its height in the fretboard to obtain any mode in any key. Let’s take C Ionian again as an example. To get the notes of C Ionian closest to the headstock, we do the following:

Let’s say we want A Aeolian, for example (this is a common scale because Aeolian mode is the natural minor scale). Since we know A Aeolian is relative to C Ionian, we just start with A as a root. So:

Ok, that was purposefully easy. What if we wanted E Aeolian because the song we’re playing is in the key of E minor?

So far, so good! Let’s make it even harder: what about if we needed F# Mixolydian? We can also tweak a bit the way we play the scale for comfort. We know two things: the only difference between Mixolydian and Ionian is a flat seventh (b7), and the distance from C to F# is six semitones (2 from C to D + 2 to E + 1 to F + 1 to F#). We do the following:

What are the most important modes to remember?

Ionian, of course, for being the ‘default’ for everything else;

Aeolian, for being the relative minor of Ionian, as many songs are written in minor keys;

Mixolydian, because of its dominant 7th, very common in chords.

This scale is heavily used in traditional Chinese and Japanese music, and it has become essential in soloing because of its elegance, simplicity, and ease of reach in the fretboard. From its root, the semitones pattern is as follows:

The three simplest and most common keys of the minor pentatonic scale are A, D and E. Here is a cheat-sheet for them:

More on the minor pentatonic scale in the article about The First Scale To Learn On Guitar.

This is a very popular scale for jazz and blues players for composition. This scale takes the versatility of the minor pentatonic scale. It adds a dash of African influence into it, with the flat 5th being a common element in traditional African music.

This scale is so deeply related to jazz and blues that, if you play on your guitar the following sequence you will hear a bluesy bass line:

More on this scale and Blues in general in the article about Best Way To learn Blues Guitar.

You reached the end of our introduction to easy guitar scales and modes. Hopefully, the names and notes in it are not scary or confusing anymore.

Make sure you bookmark this article for future reference!