The Best Way To Learn Blues Guitar In 7 Steps 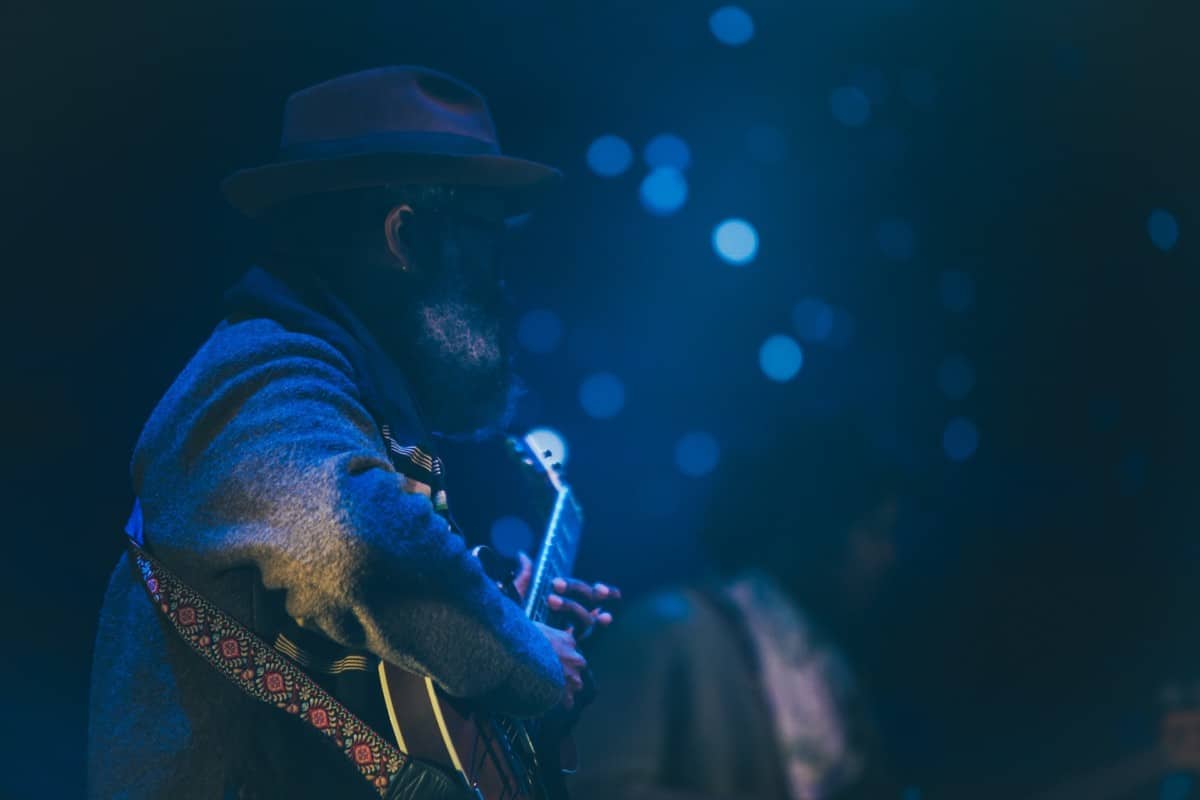 Today we will talk about Blues, a music genre that comes from deep African influences in the south of the United States. Blues is often identified with melancholy and sorrow. Moreover, this is a genre very open to improvisation and doesn’t need huge ensembles to be played (a piano, a guitar OR a harmonica will suffice). These are reasons why today it is a synonym for authenticity and “feeling the music” rather than just playing it. In this article, we will break down this timeless music style into 7 steps for the best way to learn blues guitar.

Jimi Hendrix used to say that Blues is “easy to play, hard to feel”. Like him, Oldschool players used to believe that the best way to learn blues was by listening to real blues. Here are some timeless gems from the genre.

In this song, Robert is selling his soul to the Devil in exchange for talent. If you listen carefully, you can hear him playing better and better as the song advances.

The Rolling Stones made a cover of this one, further popularizing blues into white masses.

The golden age of Blues was defined by empowered women singing on stage songs of love, heartbreak, and sadness. In this particular case, Koko Taylor talks to us about a huge party night she had with peculiar characters such as Automatic Slim and Razor Totin’ Jim.

This is a deeply sad song popularized by Big Mama Thornton and Janis Joplin. It depicts the sorrow of a misfit that feels himself a prisoner in his life.

The Animals – House of the Rising Sun

It is said that this particular song was sung by coal miners in the early 1900s. This particular cover was recorded more than 40 years later,

Lightnin’ Hopkins – Woke Up this Morning

Blues is, in my opinion, the only genre that can take an instrument well out of tune and still pull off a masterpiece like this song.

This is a more modern version of blues, being more upbeat than the rest in the list and lacking the ‘blues swing’ (more on this later). Still, you can feel how both Albert and Stevie Ray pour their hearts out through their guitars.

The basic structure of a Blues song is comprised of 12 bars, with the following chord structure:

A minority of songs will include a VI chord in the progression, others will reduce the number of bars from 12 to 4. Some songs even have a flat chord progression, meaning that they use a single chord in the entirety of the song. This is the case of Wang Wang Doodle, using only Dm7.

Watch videos of live Blues performances closely. See how every musician in the room FEELS the rhythm and even dances to it? This is because the rhythm this genre uses, also called the Blues Swing, has something very special about it.

To better understand the technical aspect of the blues swing, let’s carefully analyze a single bar.

In the typical Blues song, which has a 4/4 time signature, you will listen to 2 well-defined pulses every beat, for a total of 8 pulses every bar.

Well, not exactly. The thing about these pulses is that they are clearly off any subdivision in halves. The reason for it? These pulses come from triplets.

A triplet occurs when we divide a beat into three equal parts. This is something that might take some practice and habituation. So here is an exercise you can do at home with the help of a metronome to develop a grasp of triplets:

Now that we have triplets down, we are closer to the blues swing. What are we missing to get it? It’s two pulses instead of three in each beat. To get the Blues swing correctly, we only need to get rid of the “2” in the triplet. So, following the previous exercise, instead of counting

We would be counting as follows:

If you’re a bass or piano player, you will immediately understand how important it is to mark the Blues swing. As a guitar player, you can get away with playing outside of it more than these instruments, but you’ll fall back right into it sooner than you realize.

A with an added seventh (A7)

B with an added seventh (B7)

D with an added seventh (D7)

E with an added seventh (E7)

The most common scale for blues can be seen as a modification from the minor pentatonic scale, adding a flat 5th (b5). So, the scale would look like this:

To depict this better, let’s take a look into the minor pentatonic scale of A, with the b5:

Step 6: The Blues bends and vibratos

Blues is a stew made of many spices, and you can certainly feel the strong flavor of bends and vibratos every single bar, almost every beat.

To perform a bend, remember to use your middle finger when starting so that the fingers around it can act as support. Drag the fretted string with your finger either up or down to change the pitch of the note played.

Vibrato is a much simpler technique; instead of pushing or pulling the string entirely, we will rock the string slightly back and forth, making the pitch unstable.

Imagine licks in Blues as the characteristic howls that wolves use to communicate over long distances. You’re not copying anyone nor sound like everyone else, you’re just speaking in Blues! One of the characteristics of voicings in Blues is that they can also be played almost in the same way by a piano or a harmonica,

Do you don’t know how to read guitar tabs? Then check our TAB 101 article!

Did you know that every subgenre of rock today includes a little blues in it? Taking from the elements we’ve discussed, can you see the influence of blues in rock and modern music as a whole?

We hope you enjoyed following these 7 steps on the best way to learn blues guitar!