How Many Notes Are On A Guitar: Know The Basics And Master The Guitar 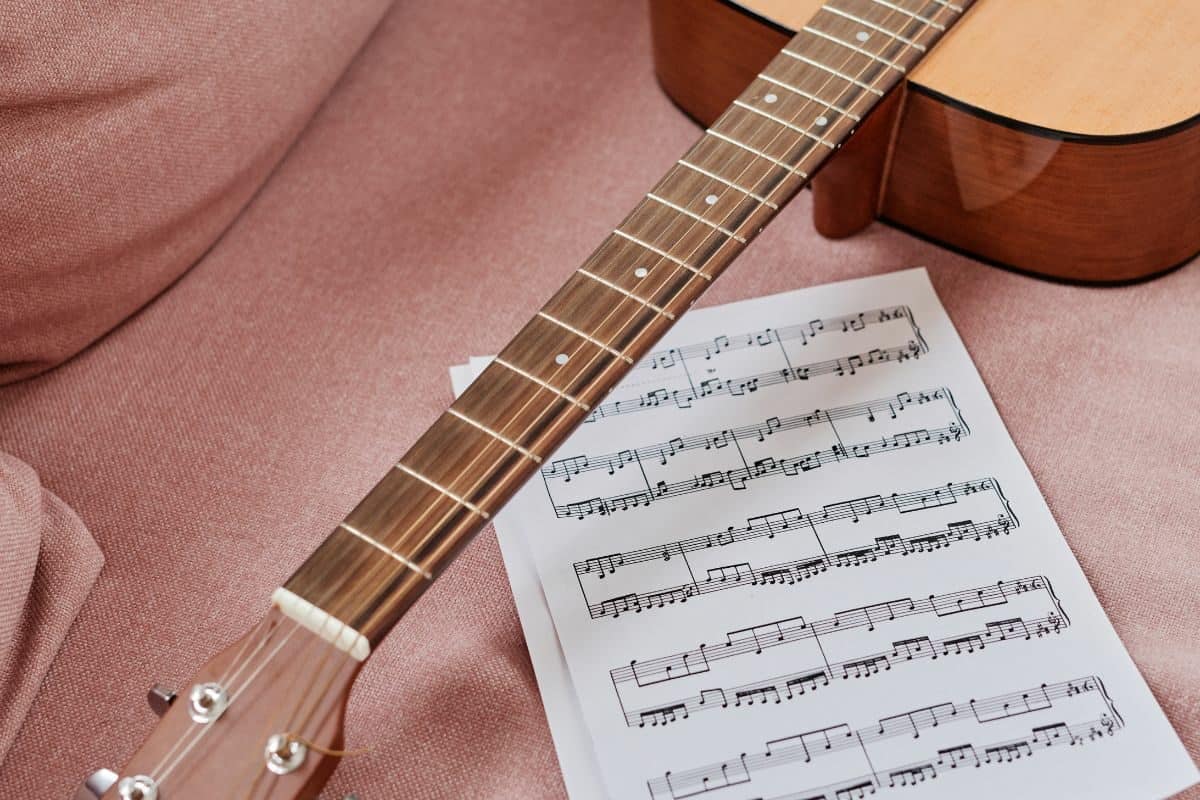 In this article, you’ll get to know all about notes on a guitar, how many notes are on a guitar, what are the different notes, how can you master those notes and more. Continue reading to get all the answers you’re looking for.

Importance of knowing the notes on a guitar

Learning about guitar notes will help you develop a strong foundation for your guitar learning. It’ll also help in fingerpicking, improvising, playing chords, and jamming with other musicians. There are many other reasons you should learn guitar notes as it’ll help you to –

Many beginner guitarists feel that learning guitar notes isn’t a priority. Meanwhile, many others learn the notes from the start and give themselves a big boost in their learning curve. While it’s true that you can rock out the basic chords without learning the notes, it is recommended that you should learn about the different notes on a guitar. Not learning notes might be okay in the beginning, but it’ll eventually catch up. Once you’ve mastered your guitar notes, you’ll be able to challenge yourself and expand your skills.

Learn how many notes are on a guitar

If you’re wondering where to start when it comes to guitar notes, a great place would be to start by memorizing the notes of each guitar string played open. “Play Open” will mean playing the guitar without holding down any of the frets. If you’ve tuned your guitar to standard tuning, the notes should be E-A-D-G-B-E. It’ll begin from the lowest pitched string, and it’ll move to the highest.

You can easily remember the guitar string notes in your head. You should memorize the sentence – Elephants And Donkeys Grow Big Ears. This sentence will help you in remembering the order of the open strings in standard tuning.

The guitar, similar to the piano, is based on the chromatic scale. In chromatic music, there will be 12 notes in an octave, with each one of them a half step apart. Each fret on the fingerboard of the guitar will raise the pitch of the string by one-half step. If you’re holding down all the strings on the 12th fret, the notes will be the same as the strings played open, only an octave higher.

How to memorize and master playing notes on the guitar

If you feel like you’re lagging behind and not able to match the notes of other beginners, you’re not alone. Every beginner struggles with playing notes on a guitar. With time and practice, you can solve these issues.

There is always a lot of confusion surrounding how many notes are on a guitar. A standard-tuned, 6-string guitar having a 22-fretboard features a range just shy of 4 octaves while having five middle Cs. Meanwhile, a full-sized piano keyboard will have more than 7 octaves while having only one middle C. It’s simply the nature of the musical instrument.

By design, a keyboard will relegate any pitch to a single key, while the guitar offers anywhere between one to five different strings and fret locations for the same note. These repetitions of the same pitch will give you many options for where to play a given note. However, they’ll cause deep confusion for beginners who feel lost above the fifth fret, especially on the inside four strings.

You should start off by reviewing your rudimentary musical knowledge. The basic units of measurement in Western music will be the half-step or semitone. It’ll translate on the guitar up to a distance of a fret, the whole step, or the whole tone covering two frets.

The musical alphabet constitutes of 7 natural notes – A, B, C, D, E, F, and G. All the adjacent notes will be spaced a whole step apart with two exceptions, B-to-C and E-to-F, which are half steps.

Compare the guitar fretboard to a piano keyboard, which is the birthplace of music theory. You’ll notice that while the keyboard separates accidental and natural notes into tidy white and black keys lying along a horizontal plane, the guitar will offer no such easy path for note recognition.

Most traditional beginner methods will cover notes up to the third or fifth fret. Above that, you’ll essentially be left to your own devices. There are a lot of notes that you should recognize. However, the first thing that you should remember is that unless you’re changing tunings, every note’s address will be permanent. These will not be going anywhere. But what to do about the empty spaces?

3. Add the accidentals on purpose

The remaining five tones in an octave will be annotated using accidentals, flat, and sharp symbols. A sharp (#) will raise a note by one half-step whereas a flat (b) will lower it by a half-step.

Enharmonic notes will occur when two different accidentals are being used for indicating the same pitch. For instance, A#=Bb, C#=Db, D#=Eb, F#=Gb, and G#=Ab. These will fill in the white spaces left in the previous step. All the missing accidentals will complete the big picture.

You should look at the guitar’s five middle Cs on different strings. You’ll notice that the notes on any pair of the adjacent string will be equidistant (five frets apart). It’ll be the case except between the 2nd and 3rd strings, where the distance has been reduced by a fret.

Once you’ve realized that this relationship is maintained regardless of the note you’re starting with, you’ll find unison on lower or higher strings by using the same formula. It happens except in the extreme high or low registers where the notes appear just once. To improve your skills, pick a pitch that appears 4 times and then play it sequentially on four adjacent strings. Now, repeat it multiple times in either direction and do it as quickly as possible.

You can find any given note in various octaves at six different locations between the open position and the twelfth fret. As the fretboard is repeating one octave higher starting at the thirteenth fret, you should play any notes and shapes.

If you map them all and pinpoint all Cs below the 12th fret, you can connect them to form a 6-point template and move it to any position on the fretboard. Similar to a constellation, the matrix retains its shape as it’ll float around to different positions in the note matrix.

As the dipper is moving towards the nut, any point in the shape that vanishes below will open position will reappear an octave higher below the twelfth fret. Conversely, any points rising above the 12th fret will reappear starting the first fret.

6. Map out the notes between open and 12th positions

In the matrix, the roots will appear on the 3rd and 5th strings. This is happening because you’ve shifted the root template down a link and added the missing link one octave higher. This will map out all six A’s between the open and 12th positions. Moreover, it’ll create a visual variation in the matrix. All you’re doing is starting the same template but from a different reference point.

Then, you should bump the template down another level and it’ll reveal all six G’s. Now do it for E’s and D’s before you come full circle to C.

Plate the template on the 12-fret grid to locate all six locations for a note. Then, repeat it from the beginning, with 12 frets higher for covering the full range of the guitar.

They’re determined and named using the lowest possible fretboard positions. Each shape will utilize a different configuration of root notes. Always and without any exception, you will find the roots of the chord shapes located as follows –

8. Connect all the dots

You will need to connect the C, A, G, E, and D shapes. They’ll connect to form five different C-chord voicing between the first and thirteenth frets. It will unify the fretboard and help illustrate how each shape will connect via one or two root notes.

9. Practice breaking down each chord

Make use of different graphic symbols of each chord tone. It’ll be fairly simple to see how the five connecting C-shaped chords are originating in an open position with the C roots, E’s, and G’s, and how all of it is happening simultaneously.

You should practice breaking down each tone into discreet matrices. Do it for Cmaj7 and then play all the root Cs. Follow it up with all 3’s (E’s), 5’s (G’s), and all 7’s (B’s) for creating unique arpeggios.

Lastly, you should take another look at the matrix, this time from a better-informed perspective. You will be able to organize the 12-fret template of natural notes into 5 different C major scale patterns. Each one of them will adhere to the root positions of the related chord shape.

The entire template could be shifted up and down for transposing the fretboard to any key. You can do it up a half-step for C#/Db or up a whole step for D. You can even do it up one-and-a-half steps for D#/Eb and so on.

Moreover, there will be different virtual dots and position markers. You will have to mentally train yourself to visualize the guitar notes and patterns on demand. The matrix, the five major chord shapes, and the major scale patterns will offer a universal point of reference. This point of reference will originate from any guitar note in any position. By memorizing them, it’ll become easier for you to master the notes on your guitar.

Thank you for reading. Hopefully, now you know a lot more about notes on a guitar, how many notes are on a guitar, how to memorize and master the guitar notes, and more. It is essential that you have thorough knowledge about the basics of guitar notes and know how many notes are there and what are those notes. Knowing about guitar notes will help you in developing a strong foundation for your guitar skills. Moreover, it’ll help in playing chords, fingerpicking, improvising, and playing with other musicians.