What Guitar Does Slash Play? 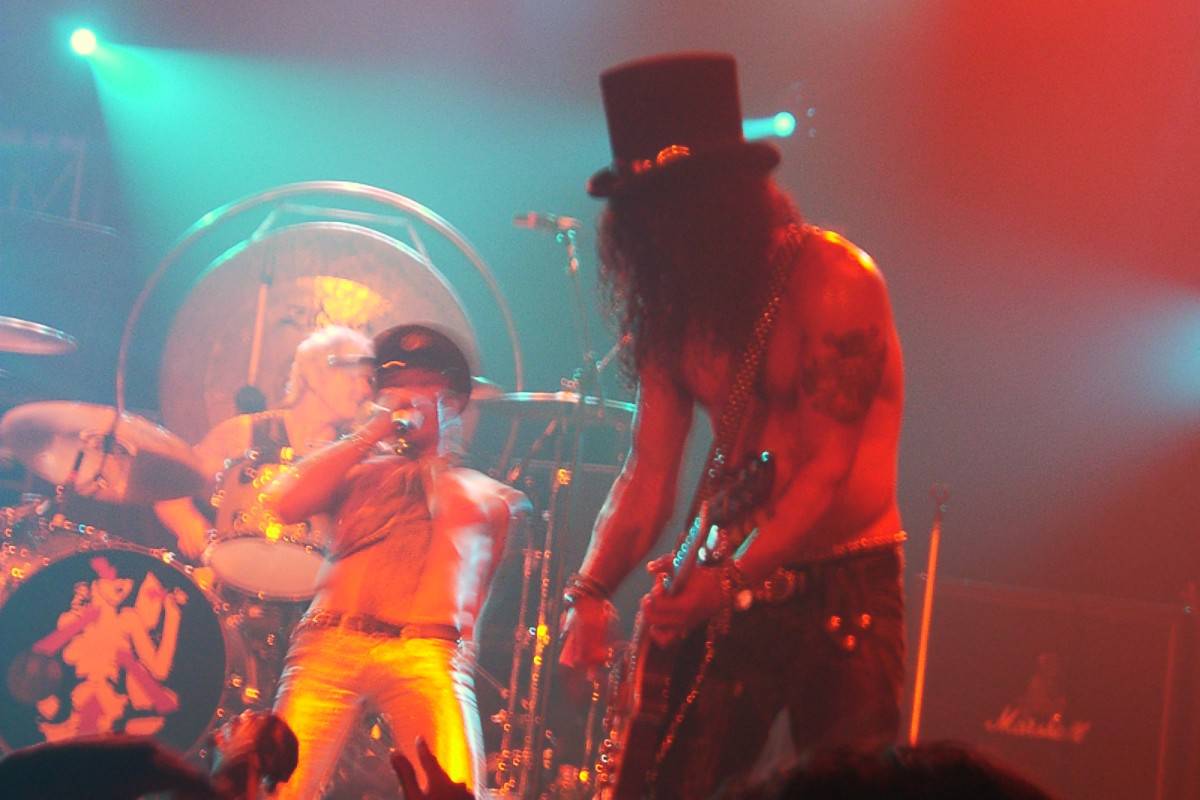 Slash is one of the most famous guitarists of all time. He is best known for being part of the legendary American hard rock band Guns N’ Roses. In this article, I will tell you the story of Slash, and in the end, I will reveal what guitar does Slash play.

The early life of Slash

Saul Hudson, known as Slash, was born on July 23, 1965, in London, England, and grew up in Stoke-On-Trent, Staffordshire. His father, Anthony Hudson, designed album covers for musicians such as Neil Young and Joni Mitchell. His mother, Ola Hudson, was a clothing designer. She made Bowie’s costumes for “The Man Who Sold The World”, and that’s how young Slash met David Bowie in the late 1970s. In 1977, the Hudson family moved to Los Angeles, USA. Soon after being in America, his parents separated, and he went to live with his grandmother.

When he was about 14 years old, his grandmother gave him his first guitar, a copy of a Gibson Explorer guitar with which he learned to play. Since then, playing the guitar became his passion, and he spent long hours practicing. At the age of 17, Slash fell in love with the music scene on the Sunset Strip, and this led him to leave school. His strongest musical influences were Led Zeppelin, Pink Floyd, Rory Gallagher, Eric Clapton, Rolling Stones, Jimi Hendrix, Alice Cooper, Aerosmith, AC/DC, The Ramones, Black Sabbath, and Jeff Beck among others.

Slash’s story with Guns N’ Roses began in 1985 when Tracii Guns, the original guitarist, left Guns N’ Roses. Slash joined the group to replace Tracii. In 1987, they released their debut album, “Appetite for Destruction”. The album sold 33 million copies, reached number 1 in the sales charts, and became the most sold debut album in history. In 1991 Guns N’ Roses made an extensive tour of 28 months called “Use Your Illusion Tour”. This tour coincided with the release of two new albums “Use Your Illusion I” and “Use Your Illusion II”. It has gone down in the records as one of the most extensive tours of all time. It consisted of 192 concerts in 27 countries. After this tour, Slash became an American citizen.

In 1993 Slash recorded “The Spaghetti Incident?” with Guns N’ Roses. In 1994 they recorded the song of The Rolling Stones “Sympathy for the Devil” for the movie “Interview with the Vampire”. From that moment on, there was a lot of trouble and friction between Slash and Axl Rose. Finally, Slash decided to leave Guns N’ Roses definitively in November 1996. At that time, he declared that he couldn’t work with Axl Rose and that he didn’t like the way Axl treated him and the rest of the band.

After participation in Guns N’ Roses, Slash was part of other musical projects. “Snakepit” was a band in which he participated between 1995 and 2002 with his friends from Guns N’ Roses, Gilby Clarke and Matt Sorum. “Slash’s Blues Ball” was a blues cover band, created by Slash. The group toured all over the world, playing blues songs until the late 1990s.

He was part of Velvet Revolver between 2004 and 2008, an initiative he carried out with Duff McKagan, Matt Sorum, Dave Kushner, and the former singer of Stone Temple Pilots, Scott Weiland. At the beginning of 2010, Slash started his own solo project. His first solo album was called simply “Slash” and had the collaboration of many artists of the rock scene of the moment. After the great success of “Slash”, he released his second solo album called “Apocalyptic Love” in 2012.

Finally, “World on Fire” was the title of the third solo studio album of the Guns N’ Roses guitarist, released in 2014. In 2016 the long-awaited return to Guns N’ Roses took place. They launched the reunion tour called “Not In This Lifetime Tour”, which was active from 2016 to 2019. In 2018 Slash’s fourth solo album, “Living the Dream”, was released, and he started the tour of this album, which ended in August 2019.

The sound of an Icon

Now we are going to explore Slash’s sound to finally reach what guitar does Slash play. Slash is one of the most recognized guitarists in the history of rock. He has a sound and style easy to identify, he is a musician with his own sound, and this is something very difficult to achieve. Slash bases his sound on Gibson Les Paul guitars and Marshall amps. Marshall and Slash had a long commercial collaboration. Slash uses tube amplifiers and some solid-state ones. He uses different models depending on whether they are for live or studio applications.

Slash has become an icon of the Gibson Les Paul model. Although Gibson is not a brand that is very given to having business relationships with guitarists, the brand has maintained an exceptional and close relationship with Slash. He has a huge collection of Les Pauls, but his best known and loved one is actually a 1959 replica built by Kris Derrig. This guitar was bought for Slash by his manager for the recording of “Appetite For Destruction” at the end of 1986. The guitar came with “Seymour Duncan Alnico 2” pickups and quickly became Slash’s main studio instrument. Another Les Paul that Slash is famous for is his 1987 Les Paul Standard, which has been used on countless tours.

What guitar does Slash play?

If you read my story so far, you already know it. But if you scrolled to the end of this article, here’s the answer: Slash plays Gibson Les Paul guitars.