Different Types Of Guitars – Everything You Need To Know 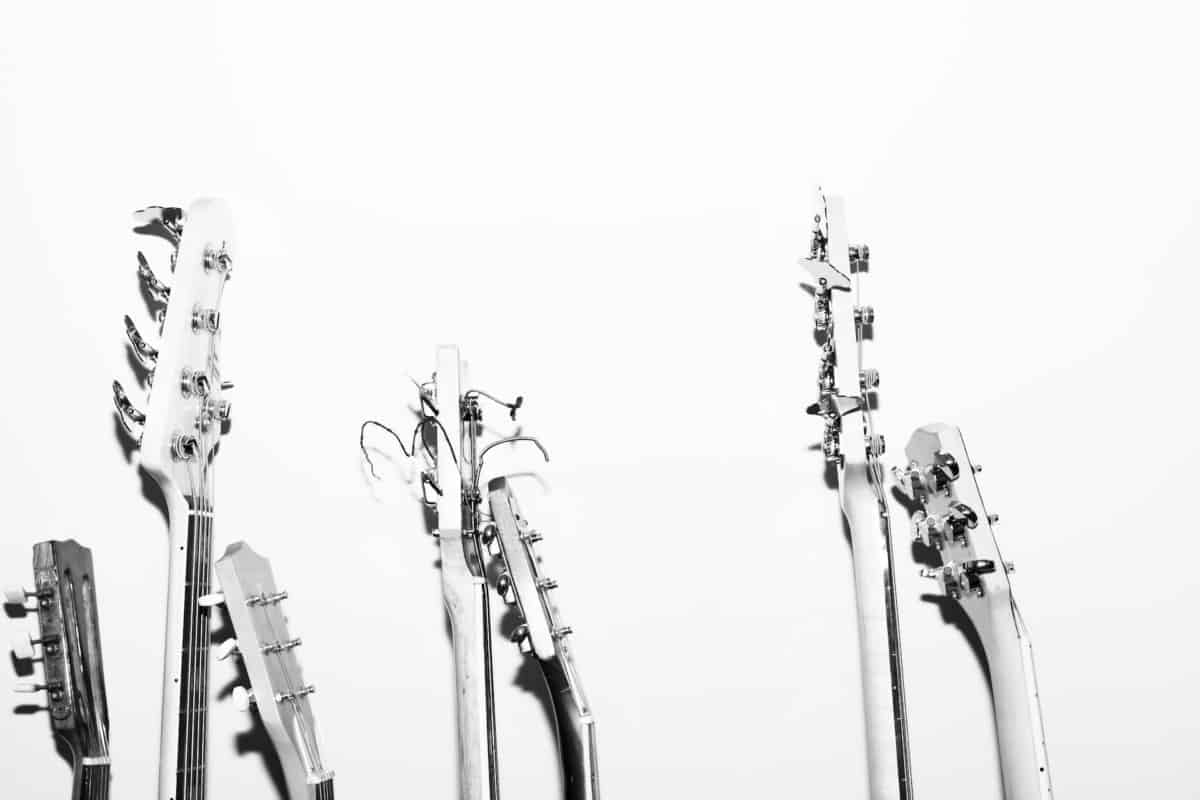 What comes to your mind when you think about the guitar? Maybe a red and white electric guitar? Perhaps a more classical, wooden guitar? Actually, there are a ton of instruments that can be called guitars. In this article, we will talk about many different types of guitars you can choose from.

Throughout this article, we will utilize the term “Acoustic Guitar” to refer to all the different types of guitars that rely on their body as a resonance box, in which the vibration produced by the strings are amplified.

When talking about acoustic guitars, we can distinguish many sizes and shapes, mostly coming from their place of origin, their particular culture, and craftsmanship.

In Europe, one of the most distinguished guitars is Flamenco guitar. This guitar has a smaller soundbox, aiming for speed and sharpness in tone.

In America, it is more common to see big guitars, such as dreadnought guitars, which are an acoustic variant that is highly valued because of its loud, deep tone.

Depending on the standard and purpose, acoustic guitars can be distinguished by several features:

Classical guitars and most acoustic variants will use nylon for the treble strings and wound metal for the bass strings. However, American acoustic guitars usually are played with metal strings entirely.

The sheer dominance of this guitar in every music style is notorious until the appearance of electric guitars, which allowed the arrival of new music styles because of their sound. However, acoustic guitars have also earned their place in the styles electric guitars have created. The music styles used for acoustic guitars can be further distinguished depending on the type. For example, dreadnought guitars make the distinctive sound of bluegrass and folk music, classical guitars shine best in baroque and romantic pieces. Flamenco guitars are the star of a style that includes many subgenres and different rhythms.

Electro-acoustic guitars are a great compromise between the power of an electric guitar and the warmth and natural feel of an acoustic guitar. These guitars can look and feel like an acoustic guitar, with the addition of pickup coils or a microphone inside the soundbox and an output jack.

Electro-acoustic guitars usually have robust bodies with a soundhole to create a resonance box, much like acoustic guitars. Most models are cutaway for easier access to the upper frets, and their pickups and microphones.

Semi-acoustic guitars are played with metal wound strings like electric guitars, usually of a low gauge, to take advantage of their natural tone.

Semi-acoustic guitars are highly appreciated by folk and blues artists because of the unique tone they have.

Electric guitars are usually the stars of the show. What makes a guitar “electric” is that the vibration coming from the strings is picked up by magnetic coils and amplified.

Electric guitars can come in many shapes and sizes since they don’t depend on a hollow body for their sound. Among the most popular guitar brands are Fender, Gibson, Ibanez, and PRS guitars.

Telecaster is pretty much an entry-level guitar, but it’s precisely its simplicity and sturdiness that puts Teles among the favorites of many musicians. Its solid square body and simple settings make it the perfect travel guitar.

Strats are the best-selling guitars worldwide, with builds for every budget. The main features of this guitar are the three pickups along the body that can be graduated in 5 settings and its floating bridge, which allows the usage of a tremolo bar.

From Gibson, Les Paul guitars are the flagship guitar for genres such as jazz and blues. They have a more grungy sound, but don’t be fooled; these guitars are more delicate than their Fender counterparts.

While electric guitars are played exclusively with metal strings, there’s a world of possibilities inside this category. The tone, volume, and quality of the strings can be modified by using strings with different gauges. A rule of thumb to remember how string gauge affects the tone of your guitar is the following: the thicker the strings are, the bigger, fuller, and powerful the sound is.

The electric guitar has made the arrival of new music forms possible, especially rock and its subgenres.

Before the invention of the bass guitar, it was typical to bands and ensembles to obtain their bass rhythms from a 3/4 sized double bass. It was Fender Guitars who came up with a model of guitar that could tap into the lower notes with comfort and even more power than traditional bass instruments.

The strings used for bass are much thicker than the ones used for guitar, to create a low, deep sound.

Currently, the bass guitar is a ubiquitous instrument. Due to its versatility and sound quality, it can be found in almost any genre you can think of as a sort of pacemaker. The things that may vary between music styles for bass guitar are the techniques used and the melodies written for it.

Certainly, the styles in which the bass guitar is the protagonist are Funk and Japanese Rock (also known as J-Rock). In both styles, the use of slapping is common.

Relatives of the guitar

If we think of guitars as fretted string instruments with a soundbox, we will find many similar versions that are close relatives to it, such as:

Lute is a generic term for any instrument with a resonance box and a neck that serves as a handle and as a means to project its strings further. This format has stood the test of time and become the father of all the instruments that fit this description, both fretless (the violin and its family) and fretted.

Ukulele is a small, 4-string instrument native to Hawaii. It has a very bright tone, and it sounds great alone or as an accompaniment. Around the world, there are instruments that share similar qualities, such as the Venezuelan Cuatro.

Mandolin is closely related to the lute in its shape and the pieces written for it. What’s curious about the mandolin is its sets of double strings. Mandolin is usually played with a pick.

The Mexican Guitarrón is essentially an acoustic bass guitar, with a prominent soundbox and thick strings used as accompaniment in Mexican folk music.

Shamisen is a Japanese 3-string instrument very similar to the guitar or the banjo. Instead of having a set tuning like most Western instruments, shamisen is tuned to the player’s liking or to the singer’s voice register, taking different intervals as a reference from the 1st string.

Banjo is a traditional American instrument, characterized by its treble, twangy sound. Instead of having a soundhole, its body is mainly a drum attached to a fretboard. The typical tuning for banjo is an open G chord.

Typically, an essential feature on the guitar is the metal bars along its neck. These are called frets, and they are used to mark notes in tune when they come in contact with the strings. Fretless guitars lack these, allowing for microtonal expression and favoring sliding and vibrato. Like the violin, they are more difficult to master because playing in tune requires a lot of training and practice.

7-string guitars usually have a low B added to the 6 regular strings, whereas 5-sting bass guitars can have either a low or a high B. These guitars were popularized by Steve Vai for its deep sound.

12-string guitars often have their strings tuned in equal pairs but one octave apart to recreate a very rich, harp-like sound. Some players will modify the pitch of the second string in each pair to create a natural tremolo sound. These guitars have fat necks and are considerably heavier.

If the thought of more strings to fret excited you (or put you off), imagine a guitar with more than one neck! Guitars like these often have their necks sitting one on top of the other, and incorporate a different tone range in each neck. For instance, a guitar with a treble neck and a bass neck or a 12 string neck. These double-neck guitars are very popular among experimental and intrepid musicians, such as Michael Angelo Batio, who often plays on guitars with their necks facing away, using tapping to achieve this feat.

When thinking about guitars, there are tons of shapes, sizes, and sounds to choose from. Take your time, ask around, and listen to different models to find a guitar that resembles best your personality and playstyle.