A Tale Of Legendary Stripes: What Kind Of Guitar Did Eddie Van Halen Play? 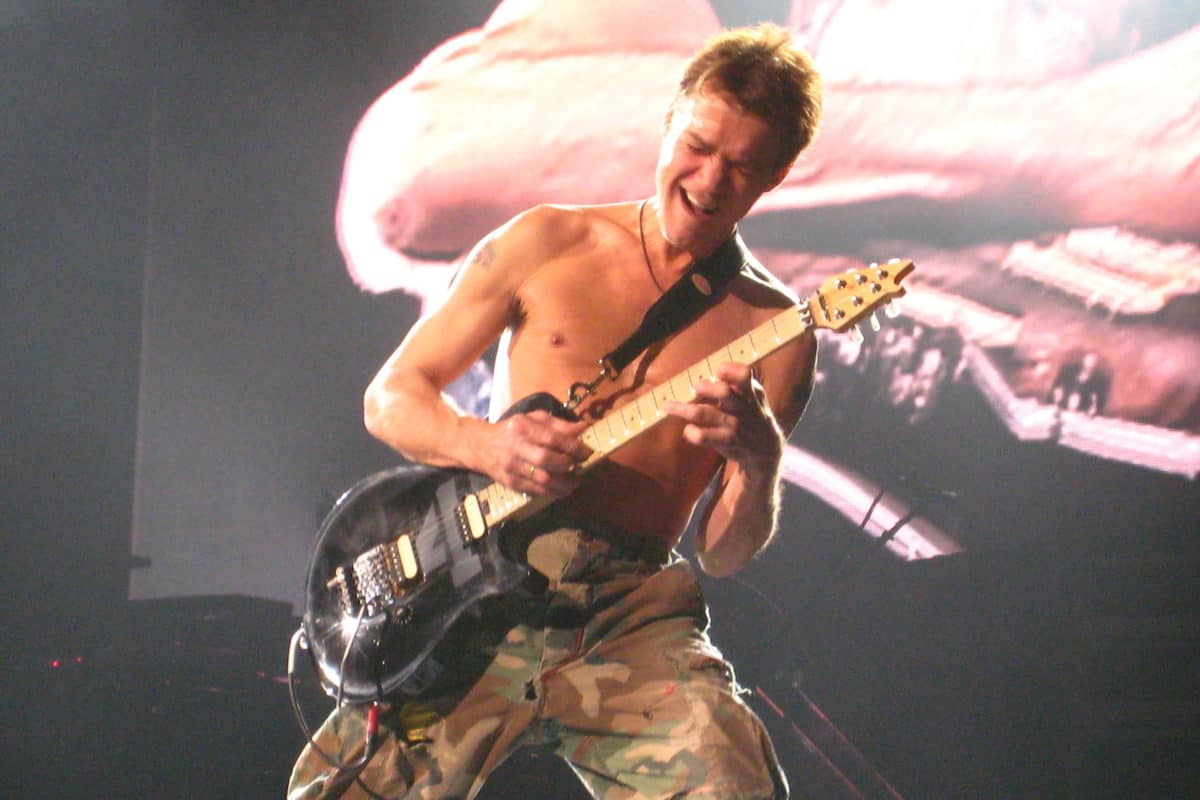 Spearheaded by one of the most influential hard-rock guitarists of the past century, Van Halen is the quintessential rock band of the 80s (skedaddle, Mötley Crüe megafans). The band is behind some of the most memorable and decade-defining tunes, from Hot for Teacher and Dance the Night Away to Panama and Runnin’ with the Devil. Van Halen is simply second to none.

As much as we’d like to write a couple of paragraphs on the impact that vocalist David Lee Roth has had on the band, this brief article is dedicated entirely to virtuoso guitarist and namesake of the band, Eddie Van Halen. There’s no telling how many guitars Eddie has experimented with in pursuit of the perfect guitar tone that sets Van Halen apart from other era-sharing rock acts.

ALSO READ: Guitar Tricks Cost – Is It Worth The Money?

The Frankenstrat is quite simply the result of combining the looks and tremolo of a Fender guitar with the sound of a Gibson. Eddie built this guitar all by his lonesome in 1974 after getting its factory-reject maple neck and northern ash body for $130. He later added a Fender tremolo that he got from a time-worn 1958 Stratocaster, a Gibson PAF pickup, and some Schaller tuners.

Eddie painted the guitar black, then he took some masking tape and rolled it around the guitar’s body a few times. Then, he repainted his entire guitar white. Finally, he repeated the process and painted the guitar red. The result? The famous black and white stripes that Eddie Van Halen’s Frankenstrat guitar are known for. He also built the pickguard by himself, and to finalize building his Frankenstrat, Eddie equipped the guitar’s headstock with a Gibson decal.

The Frankenstrat’s neck has been changed quite a number of times over the years. Additionally, the bridge has evolved from the tremolo that he got off the old ‘58 Fender to the original Floyd Rose bridges. Many guitar manufacturers tried to capitalize on the popularity of Van Halen by creating replicas of the Frankestrat, with Kramer Guitars being the first to be endorsed by Van Halen.

For Van Halen’s second album, Eddie decided to build another guitar that’s similar to the first. To realize his vision of his new Frankenstein, Eddie asked Charvel to route a Strat-style guitar body that he had so that he doesn’t have to utilize a pickguard. He painted the guitar yellow and used the same tape masking deal in order to get the stripes that have become a trademark of his.

The guitar was essentially a 1979 Charvel Hybrid VH2, also known as the Bumblebee. Here’s a brief piece of rock-and-roll trivia for you: Eddie’s second Frankestrat was buried in a Kiss Kasket with celebrated heavy-metal guitarist Dimebag Darrel of Pantera who died tragically in 2004. It’s said that Van Halen has actually presented the original guitar at Dimebag Darrel’s funeral.

RELATED: What kind of guitar does Eric Clapton play?

It’s speculated that Eddie got his Ibanez Destroyer around 1977, before even recording his first album. The 1970s Ibanez Destroyer 2459, in its default state, has a natural finish, but no guitar is safe from mad scientist Eddie Van Halen’s experiments. He painted the guitar all white in the beginning, but he eventually went back to his good-old masking tape to get his stripes.

That’s not all he did to the guitar, though. At the outset, the guitar was a dual-humbucker made from Korina. Eddie used a hacksaw to remove a notable chunk of the wood, which gave it sort of an open-jaws shape, hence the nickname Shark. The guitar was utilized in a couple of Van Halen’s music videos, including You Really Got Me and Runnin’ with the Devil.

Sadly, the horrendous experiments that the Shark has gone through under the hands of Eddie Van Halen, mainly the removal of the wood, have rendered the guitar completely useless. You may be wondering what guitar Eddie used to record Van Halen’s third album. Well, he utilized another Destroyer that he got from the then-unknown Chris Holmes, lead guitarist of W.A.S.P.

To end this article, we’re going back to the guitar that started it all for younger Eddie Van Halen. The 1960 Teisco Del Ray WG-4L was Eddie’s very first guitar. He bought it from Sears with four pickups, setting him back a total of $110. At the time, Eddie didn’t have any extra money to buy an amplifier, so he’d play his new Teisco on a table since sound resonates through wood.

Playing the guitar wasn’t Eddie’s first inclination. Before buying his Tesco guitar, Eddie bought a pair of drums. However, he got caught up with working around the neighborhood so that he can pay for a full drum set, which didn’t give him enough time to practice but gave his older brother Alex plenty. Seeing his brother getting good at the drums, Eddie decided to play guitar.

Eddie’s particular Teisco guitar was based on the Ibanez 3904, as it featured a body shape and pickup layout that are both quite reminiscent of the 3904’s. Eddie probably bought that guitar around 71, which, if you do the math, gave him three years to work his guitar chops before switching to the Frankestrat. Then again, he might have had other guitars during that brief period of time.

How Much is Eddie Van Halen’s Frankenstrat Guitar Worth?

Van Halen’s original Frankenstrat which he had built all by himself is valued at around $100,000.

Where is Eddie Van Halen’s Guitar?

Eddie’s Frankenstein can be found at the Metropolitan Museum of Art of New York City, along with his 1978 touring rig.

What Kind of Strings Did Eddie Van Halen Use?