One Guitar All Night Long: What Kind Of Guitar Does Carlos Santana Play 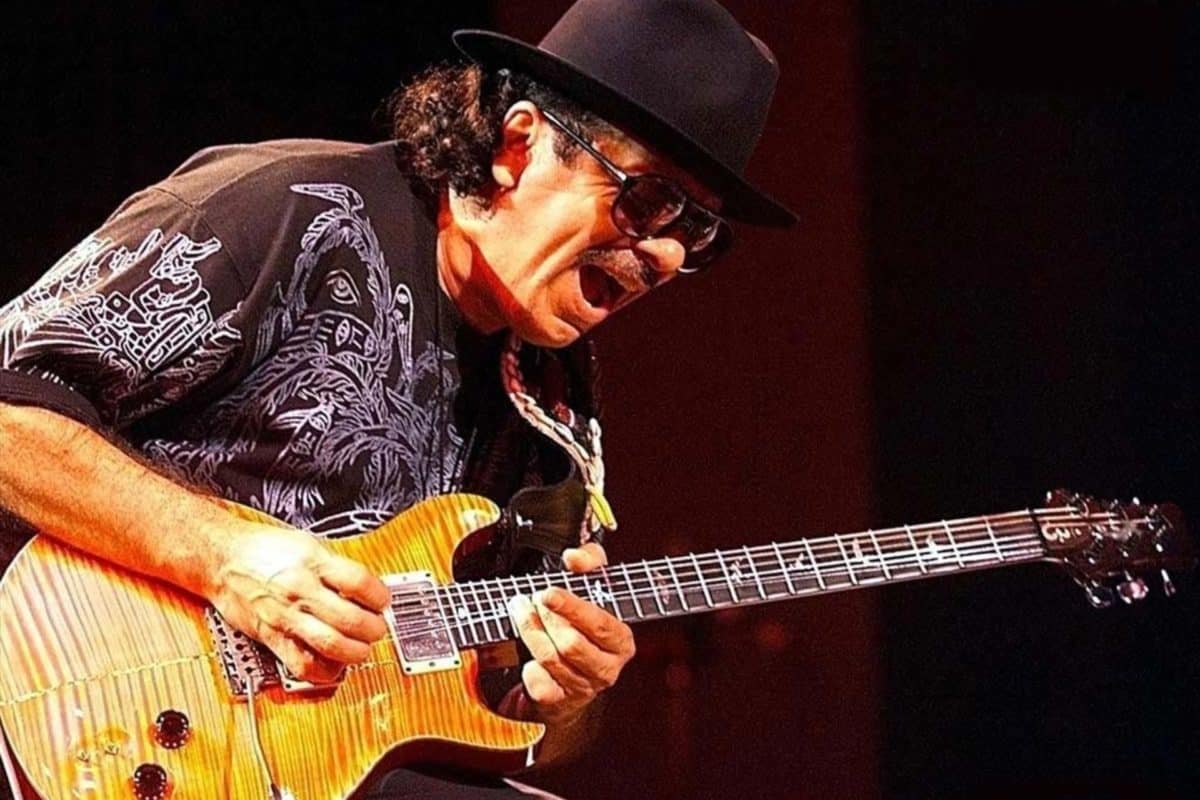 One day, I was lying on the couch, swiping through my playlist for something that would caress my ears. It was filled with monotonic tracks—until the guitars started speaking Spanish! Immediately, my ears attributed that mix of blues and salsa to the iconic Carlos Santana.

Though Santana might not be your average virtuoso, his approach to music has significantly impacted rock history by introducing his Latin-infused blues notion in his comeback album, Supernatural. Back in 1999, he shot his single Smooth off of this album to the audience, reinventing the psychedelic ambiance in blues rock with Rob Thomas.

But, what kind of guitar does Carlos Santana play to refurbish this rock subgenre? That’s the perpetual question that we’re going to break down from a guitarist’s vision by investigating his spicy lineup of PRS guitars.

A Deep Dive into Santana’s Rig: A Safe PRS Haven?

The key to Santana’s on-stage mindset is that he doesn’t want to be involved with tech. Unlike most guitarists who often switch guitars on stage, he prefers to rock one guitar throughout any given gig or concert. This approach is similar to any guitarist in a casual setting—care more about music, care less about electronics.

The PRS Golden Eagle is the guitar that Santana relied on to record the lead guitar lines for his 12th studio album Zebop! Initially, luthier Paul Reed Smith lent Santana this guitar to give him an idea about how well-built PRS guitars were. Soon after, Santana appreciated both the sustain and the guitar’s deep tone, describing the timbre as “tenor.”

What’s really important about Santana’s guitars is the fretboard. This guitar’s back uses mahogany to distribute the weight between the feather-light maple top and the heavy mahogany neck and rosewood fretboard. The fretboard has that “buttery” feel that makes it easy to execute bends and slides.

Moreover, Smith implements Santana’s favorite layout of “Wide Fat” frets. For someone coming from a Latin playing style like Santana, he wanted Smith to assimilate the fret size in his electric guitar to the wide frets of classical guitars. In the end, the PRS Golden Eagle marks the end of Santana’s quest for a sustain-rich, warm tone profile.

Code-named Salmon, the PRS Santana II is the closest to our guitarist’s heart. Being the one used for recording his hit album Supernatural, this guitar consolidates the parameters we’re used to in Santana’s warm, depressed tone witnessed in the music video for Smooth.

The Santana II features the same maple top and mahogany back we find in the Santana I. This tonewood blend ensures maximum sustain for every note that Santana strikes. The neck is one solid chunk of rosewood for the neck itself and the fretboard, which exhibits the spacious fret layout that he has admired in the Santana I/Golden Eagle.

When I tried it out at Guitar Center, the fretboard gave so much vertical freedom as I confidently nailed the pentatonic licks Santana is known for. Guitartricks offers some enticing lessons to get the hang of his style, check them out here. However, there’s a difference between the Santana II I played there and the one he has in his arsenal.

Santana ditches the PRS Phase II tuners for the more robust Phase III tuners. The reason for this is that he aggressively hammers the tremolo bar to achieve a dive bomb effect, something that causes strings to go out of tune. He believes in the “one night, one guitar” quote. So, he opted for more stable tuners to evade tuning the guitar on-stage.

RELATED: What kind of guitar did Eddie Van Halen play?

Note that the Santana II has a reissued version code-named Son of Salmon, which features a mahogany neck instead of a rosewood one due to the import regulations in some EU countries, limiting the trade of endangered wood species.

The Model T Jazz rises from the ashes of Van Nuys, California. Built from scratch by the luthier Toru Nittono, this semi-hollow guitar has been Santana’s nylon-string companion since the dawn of the second millennium.

The Model T boasts a spruce top, naturally producing a wide range of textures for this warm tone—only professional guitarists can exploit the tone nuance of spruce. Like almost all of Santana’s guitars, both the neck and the back are constructed from mahogany for weight distribution.

The choice of ebony for the fretboard is a wise move from Nittono since spruce is a dense tonewood that produces overly warm tones. To avoid obtaining an annoyingly deep timbre, ebony balances the output by boosting the tone’s bright parameter.

This guitar uses an L.R Baggs T-Bridge piezo system with 6 individual pickups for every string and a custom-built preamp on the guitar’s back. Santana uses an MBrace Guitar Holder instead of a strap for on-stage performance with the Model T.

Santana believes that a musician shouldn’t struggle with a congested guitar. The right guitar should make you forget about the execution of techniques, giving you more confidence in whatever you’re phrasing. That’s what gave rise to a deep friendship between Santana and Paul Reed Smith, a friendship that’s turned a new page in the guitar industry.

What is Carlos Santana’s Favorite Guitar?

Since the release of Supernatural, Santana has had a soft spot for his PRS Santana II, and he still rocks it to this day.

Where Does Carlos Santana Live Now?

How Much is Carlos Santana Worth?

After a plethora of concerts, gigs, and album releases, Santana has a net worth of $80 million, as of 2020.