What Kind of Guitar Does James Taylor Play? 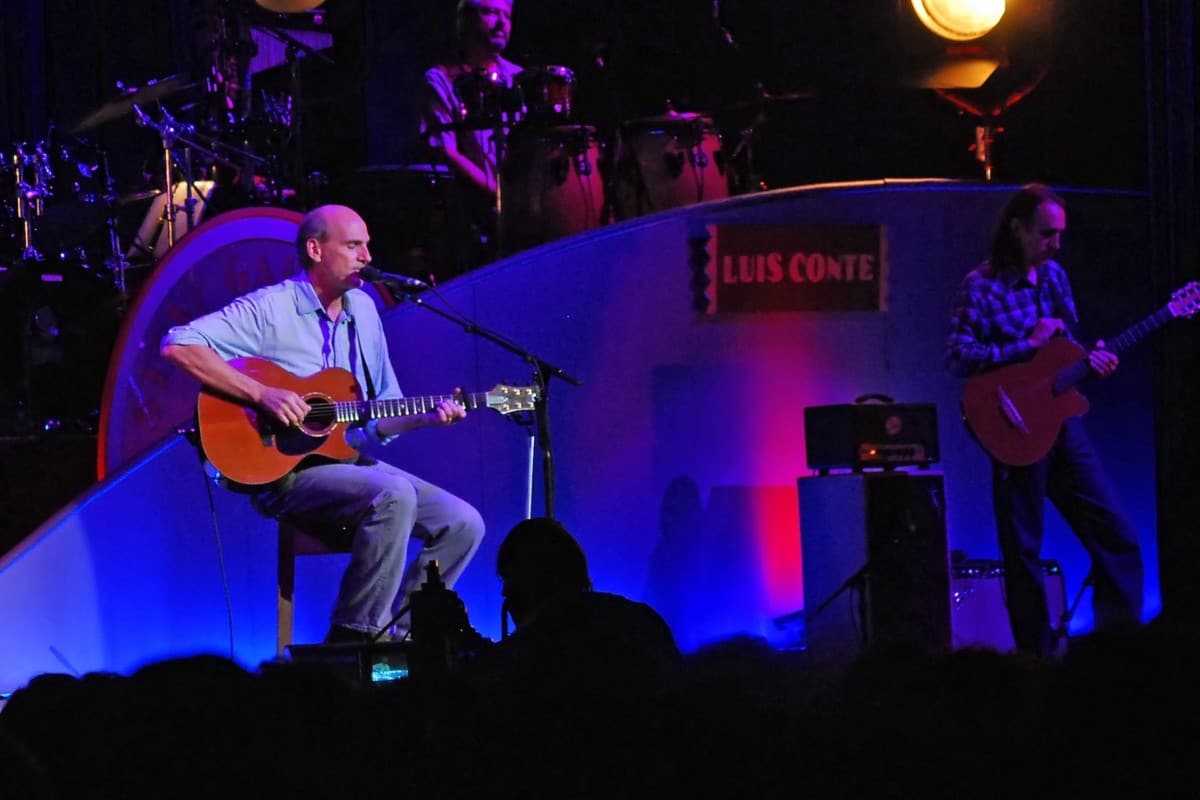 We’ve seen fire and we’ve seen rain, but we’re yet to see anyone come close to James Taylor’s unique interpretation of folk-rock music. Albums like Sweet Baby James, New Moon Shine, and Gorilla, just to name a few, will forever have a special place in the hearts and souls of many.

James Taylor can play both the harmonica and keyboards, but his unique sound consists of two integral components: his soothing vocals and his joyful guitar playing. Now, since we don’t have Taylor’s vocal cords, we’ll just focus on how he’s able to get that mirthful guitar tone of his.

ALSO READ: Is Guitar Tricks Worth It? [Complete Review]

James Vernon Taylor has been seen playing a wide variety of acoustic guitars from a bunch of different brands. The one thing that’s in common with most of these guitars is that they feature steel strings. Even so, there’s one guitar that’s associated with Taylor’s earlier body of work.

The guitar we’re alluding to is the Gibson J-50, which happens to be Taylor’s very first guitar. It was used on records like Sweet Baby James, Mud Slide Slim and the Blue Horizon, and Gorilla. Taylor has also utilized guitars from brands such as Martin, Olson, Yamaha, and Epiphone.

Both the J-50 and J-45 were built to be budget-friendly guitars for intermediate players. Shortly after their release, word got out about their exceptional quality and tone, which has led a broad range of musicians to pick them up. Color is the main difference between the two models.

Some of the most prominent names that have held the Gibson J-45 include Elvis Presley, John Lennon, Bob Dylan, and Bruce Springsteen. Both the J-45 and J-50 are no longer as affordable as when they were first released, having been held by various big-name rock and roll legends.

The J-50, which is essentially a J-45 with a natural finish rather than a sunburst finish, produces a clear and very pleasant tone that just brings joy to the listener. The guitar is also quite easy to play because, once again, it was released as a guitar for intermediate players back in 1947.

RELATED: What kind of guitar does John Mayer play?

With the inception of the British rock invasion, guitar manufacturers started creating guitars that are befitting to movement, such as Epiphone’s Sorrento. Nothing about the Sorrento goes in line with what Taylor is known to use, but the man was able to integrate it perfectly into his music.

The Sorrento features a maple body and mahogany neck. It produces a very velvety tone that’s perfect for bluesy rock. Thanks to its simplistic design and fairly broad construction, the guitar is held in high regard when it comes to its ability to accommodate smooth, warm guitar solos.

The front portion of the Martin D-18 is constructed from spruce, whereas the back and sides are made of Indian Rosewood. The guitar has a pretty distinct twang, which seems to be a common theme amongst all of the acoustic guitars James Vernon Taylor has chosen to play.

Olson guitars have been played by an astounding host of rock and roll legends, from Lou Reed to Paul McCartney. James Vernon Taylor has been known to play more than just one Olson, so it was hard for us to highlight a single model. They’re all premium handcrafted guitars, anyway.

The thing about Olson guitars is that they’re handcrafted to order by James Olson himself, and they don’t really come for cheap, with most of them valued at up to $15,000. Olson guitars were initially very obscure, but ever since Taylor got his hand on one, they’ve left quite the impact.

James Taylor played different kinds of guitars in his musical career. Among others, he played a Gibson J-50, an Epiphone Sorrento, a Martin D-28, and different types of Olson guitars.

If you’re interested in learning how to play the guitar like James Taylor, we recommend checking out the Guitar Tricks online learning program – they have some excellent guitar lessons to offer.

What Kind of Guitar Strings Does James Taylor Use?

James Taylor is known to use John Pearse Strings with a light .011 gauge. He also used Kaman Adams phosphor bronze strings back in the 90s.

Definitely! Taylor’s inventive use of various techniques has helped him establish his very distinct and soothing sound. Sweet Baby James is an excellent example of his guitar playing.

How Does James Taylor Tune His Guitar?

We can write for days about the ACU Sweetener and the way James Taylor tunes his guitar, but we think it’s better that you hear everything from the man himself. Check out Taylor’s free tuning tutorial on YouTube.