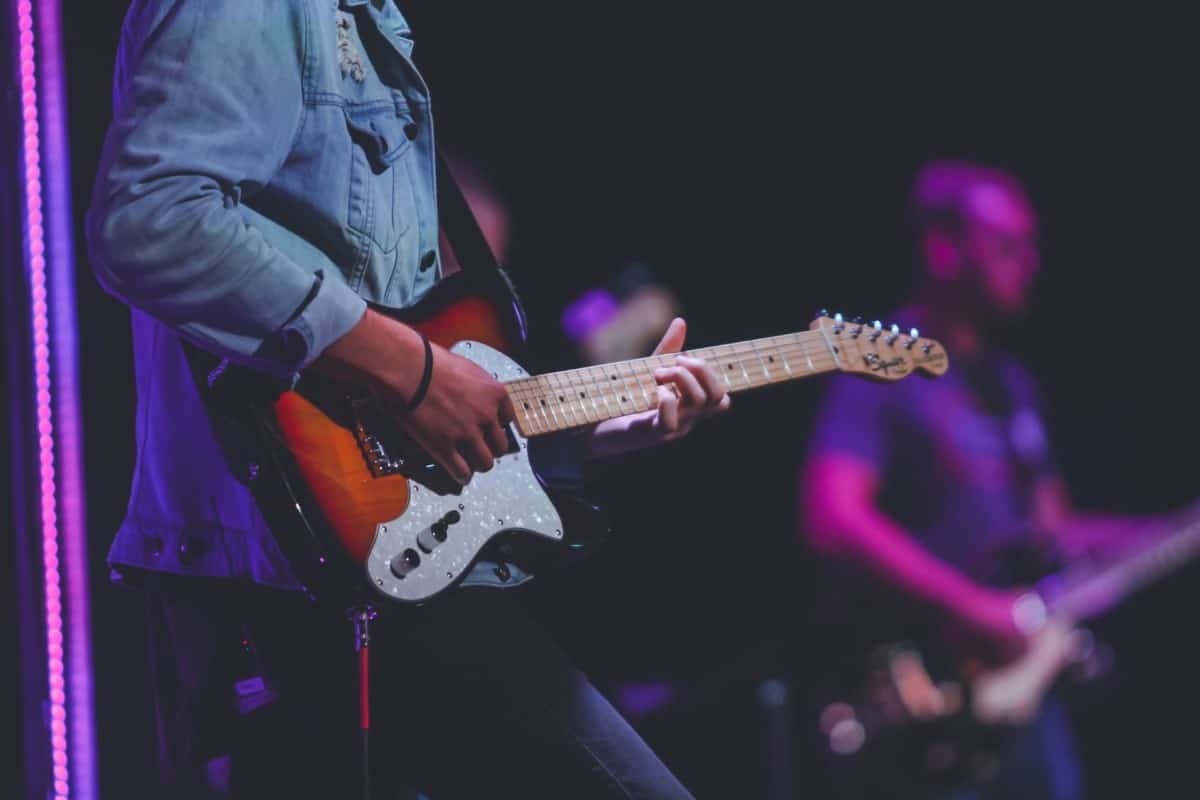 Let’s face it; learning the guitar can be difficult. The first steps of learning are mostly aimed at the theoretical side of the guitar, like chords, scales, and notes. While this is all essential, maintaining enthusiasm while a tutor grinds through the basics like a school teacher can and does put many people off. Between tutoring or even if you’re self-teaching, playing riffs (a repeated phrase in a song) will boost your passion for playing. You can hear the results and gain a sense of actually being your heroes! Not only that, but you gain an insight into different techniques, which is a boon for your own riff writing. You don’t have to learn a full song, just a sound bite or the good bit…

Strangely, most people don’t want to learn “Itsy Bitsy Spider.” Can you imagine Page or Hendrix strumming out “Twinkle Twinkle”? I certainly didn’t when I started playing; I wanted to go straight to the finish line. Sure, you have to be able to walk before you can run, but there are guitar riffs that sound great despite being deceptively simple to play. You can learn them at any level, and they won’t sap you of your spark.

I’ll take you through five riffs that are brilliant to learn and will hopefully leave you feeling like a guitar god. Oh, and I’ve left out “Smoke on the Water”…

How To Learn Guitar Riffs?

Before we get to it, you might be thinking: wait, how do I learn these riffs? Well, in my opinion, there are three ways to do it.

The first is playing the phrase by ear. Essentially that means imitating the section almost instinctively. Listen to the song and work your way through the notes until you hit the mark. It’s certainly difficult for a newbie, so don’t worry if it’s not for you, but it will pay dividends in the end. Down the line, you’ll be able to hear a song and have an idea of where it should be played without even touching a guitar! Like I said, it’s difficult, and your ear will naturally better over time anyway, so never fear.

Number two is through tabs. The kind-hearted people of the world tab songs out for guitarists looking to learn songs and riffs. Tabs are numbered diagrams that show what notes are played on each fret and each string. They’re super easy to learn and break down what should be played. Be warned though some tabs aren’t always bang on, so if a note sounds a bit off, it may well be.

Last is learning through online videos. Through YouTube or paid online tuition sites, these videos break down a song in the flesh… sort of. This method is arguably the easiest because you can see a person playing the riff, and they’ll break it down string by string. You can go at your own pace too. Pause the video and repeat it back. Some videos are more thorough than others, but there are so many people doing it that you’ll definitely find a video suited to your pace and skill level.

With all these methods, slow it down! At first, playing at full-speed can be hard, so play the song at half speed before playing it for real.

This song has a warm place in my heart not only because it’s a great tune, but also because it was the first song I learned to play. Nostalgia aside, it’s still a good song to know and perfect for the newcomer.

The opening to “Pretty Vacant” is essentially an A major chord with the individual strings picked in a particular pattern. The root, the octave up, and then the fifth; it’s just three notes! Simple and yet incredibly effective, “Pretty Vacant” is easy to play and sounds great with distortion.

The Hives – Hate To Say I Told You So

If you’ve mastered power chords or at least know them, then you’re half-way there to learning “Hate To Say I Told You So.” If not, I’ve linked a video – they’re a beginner’s bread and butter for learning songs. So many songs can be learned just through knowing power chords. They can be moved up and down the fretboard, and they sound amazing!

The speed of “Hate To Say I Told You So” may be quite tricky to nail at first, so slow it down. Play it at your own pace and then speed it up. Playing alongside the song is good for your timing, but you have to know the section inside and out before that.

Okay, so this one is quickly becoming the new “Smoke On The Water,” but it’s still a good riff to learn.

For “Seven Nation Army” you can build the difficulty level for yourself. At first, try to play the root notes (the bass notes on the low E string) of the song. Once you’ve grasped that, play the song with rock chords.

Again, slow it down! The majority of these songs have a quick tempo, so you’re most likely not going to nail it at full-speed straight away.

The Rolling Stones – (I Can’t Get No) Satisfaction

Now for one without the use of power chords…

“(I Can’t Get No) Satisfaction” is three notes played around the first three degrees of the B minor scale or Aeolian if you want to impress your friends.

Perhaps the most difficult part of this riff is catching the individual notes on the A string. When I first started playing, I used to wind my low E string above the fretboard, so it was out of action. I can’t stress enough how silly that was of me, but it was done so that could hit the notes on the A string with precision. I was young, don’t blame me… Anyway, don’t do that! Instead, get close to the string with your pick. Once you start picking with precision, you’ll find that you can move your picking hand further and further away. It takes time to pluck with accuracy; hence patience is crucial to progress. Rome wasn’t built in a day and so on…

For something a bit more testing, try “Black Dog.” It’s a classic; it’s certainly a step-up from the rest of these riffs, but practice makes perfect.

Written by one of the masters of riff-writing, Jimmy Page, “Black Dog” is an example of a song that’s written around a repeated guitar phrase. Who says you need chords?

Primarily written in the A blues scale, “Black Dog” will give your fingers a work out to be sure! The hardest notes to catch are the hammer-ons and pull-offs on the G string. Take your time! Page is a virtuoso. No one can expect you to get this one straight away.

About the timing… The guitar and bass in “Black Dog” are in a different timing to the drums. You’re not going mad! Playing the riff on your own is much easier than playing it in time to the song. Regardless, it’s an incredibly fun riff to play.

All of these songs, minus “Black Dog,” are a prime example of simplicity being played in an effective way. Not everything has to be difficult to sound good. In fact, some of the best riffs are the easiest to play. When you learn riffs, you further the spectrum of the guitar by seeing how the greats do it.