One Guitar To Rule Them All: What Kind Of Guitar Did Johnny Cash Play? 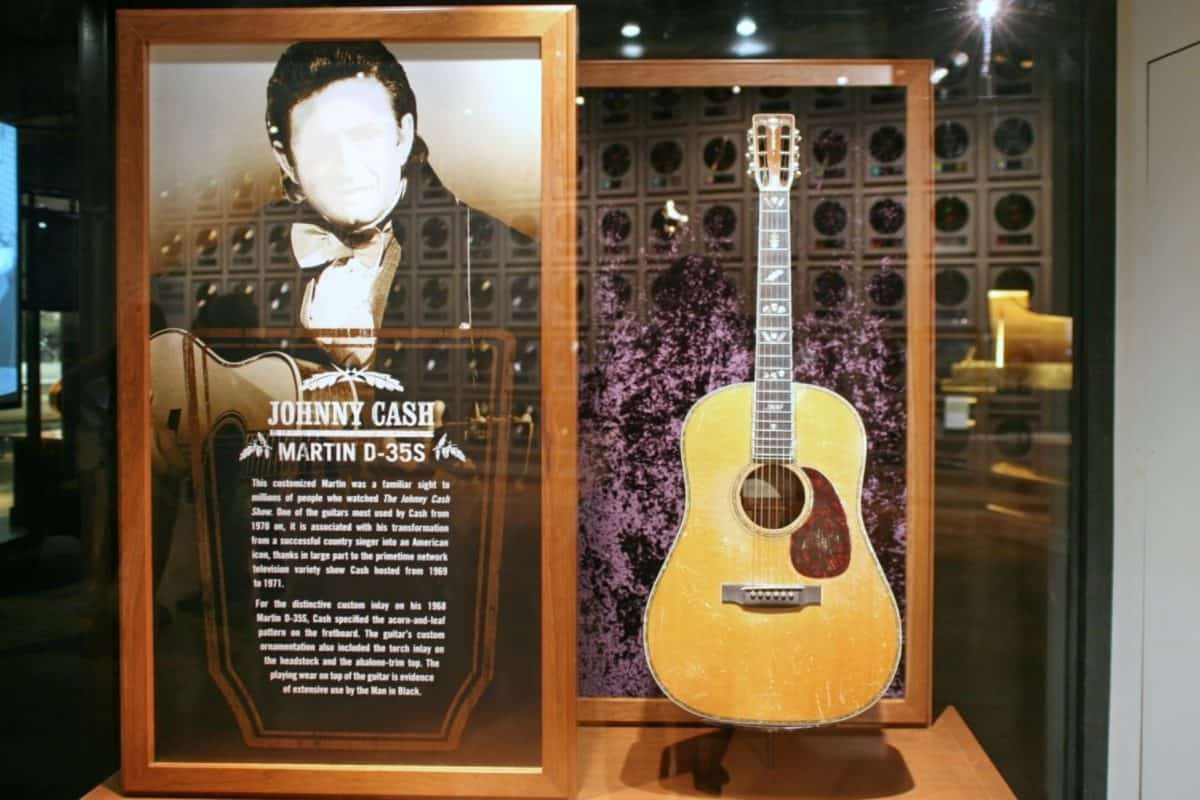 If there ever was a pantheon of the greatest and most influential musicians to have ever walked this earth, the Man in Black, Johnny Cash, would certainly be at the high table. Unlike the many one-hit wonders of today, Cash’s discography flaunts numerous celebrated classics, from Ring of Fire and Folsom Prison Blues to I Walk the Line and Sunday Morning Coming Down.

J.R. Cash was a rhythm guitarist who primarily played simple chord progressions, which was an exemplary sound for rock and roll music back then. Not just that, but it also bled into the DNA of country music, the genre that Johnny would illustriously symbolize. In this brief post, we’re going to shed light on the one guitar that helped the Man in Black establish his charismatic sound.

Whether in the studio or on stage, Johnny Cash was always seen playing Martin guitars, and he had played quite a few. However, Johnny Cash’s most favorite guitar, the one that would forever bear an opulent association with his name, is the Martin D-35. To complement his Man in Black image, Johnny Cash’s specially-made D-35 brandished an idiosyncratic polished black finish.

Cash played his Martin D-35 religiously on stage for around 20 years. As a tribute to his musical genius, Martin has come out with an almost-identical facsimile of Cash’s instrument, aptly-called the D-35 Johnny Cash Commemorative. This post will knuckle down to unveiling everything you need to know about the D-35, from its construction and finish to its bracing and sound quality.

Martin is synonymous with dreadnought acoustic guitars, and the D-35 isn’t any different, which is far from a complaint. The dreadnought guitar shape is arguably the most versatile of all guitar shapes. It offers enough nuance and power to complement most music genres. It’s not all about the body shape, though. The tonewoods used to build a guitar have a major influence as well.

RELATED: What kind of guitar does Carlos Santana play?

The classic configuration of East Indian rosewood and solid Sitka spruce is present in the D-35. If you take a look at some of Martin’s high-end acoustic guitars, you’ll notice that they share the same three-piece East Indian rosewood back found in the D-35. With the aid of its Sitka spruce soundboard, the D-35 is able to produce a warm and bright sound that’s quite distinctive.

The main reason why Martin chose to use East Indian rosewood for the guitar’s sides and back is to round out the tone produced by the Sitka spruce soundboard. Please note that East Indian rosewood is a very rare type of wood, which makes it quite expensive. However, the clarity that it offers in terms of treble and bass frequencies while playing the guitar makes it worthwhile.

Equipped with an ebony fingerboard, the D-35 boasts superb playability, as ebony fingerboards have a natural oiliness to them, and their grain is fairly tight. The Martin D-35’s neck has a white binding that does an outstanding job of contrasting the fingerboard’s color tone. The neck itself is made of select hardwoods, and it flaunts a high-performance taper and low oval profile.

The neck’s low profile notably adds to the playability factor, as it makes it a faster-playing neck. It’s very hard to find a similar neck on other dreadnought guitars. Transitioning from playing an electric guitar to an acoustic guitar can be very difficult without the right guitar. The D-35 is one of the select guitars that will help you achieve a smooth transition from electric to acoustic.

Even though the Martin D-35 is associated with some of the biggest music acts, including Elvis Presley, Bruce Springsteen, David Gilmour, and Judy Collins, the guitar is far from being flashy in terms of aesthetics, which is actually a common theme amongst most Martin guitars. There’s nothing exceptional about the finishes either. The Martin D-35 is all about the artistic touch.

RELATED: What kind of guitar does Garth Brooks play?

The D-35’s fingerboard flaunts understated inlays rather than big abalone inlays, and its rosette is nothing to shout about, really. However, the guitar manages to pull off a modern look, thanks to its smooth finish, chrome tuning machines, and antique white binding. The D-35 is available in a few different colors that vary in pricing, including Natural, Sunburst, and Ambertone.

In addition to the shape of the guitar’s body and the tonewoods used in its construction, bracing is an extremely influential factor when it comes to tone. There are various bracing positions that can be used for a guitar. Martin chose to use a forward-shifted X bracing on the D-35. Note that the bracing isn’t scalloped whatsoever. This placement helps the soundboard vibrate better.

Johnny Cash had a pretty distinct voice and unique style of playing, but while it might be difficult to replicate the Man in Black’s exceptionally rich and deep voice, learning how to play the guitar like Johnny Cash is within reach. All you have to do is check out Guitar Tricks’ online program – or check here my Guitar Tricks review.

Why Did Johnny Cash Play on the Neck of His Guitar?

Johnny Cash was quite unconventional in his playing. He used to strum up the neck of his guitar because he liked the sound it produced.

How Much is Johnny Cash’s Guitar Worth?