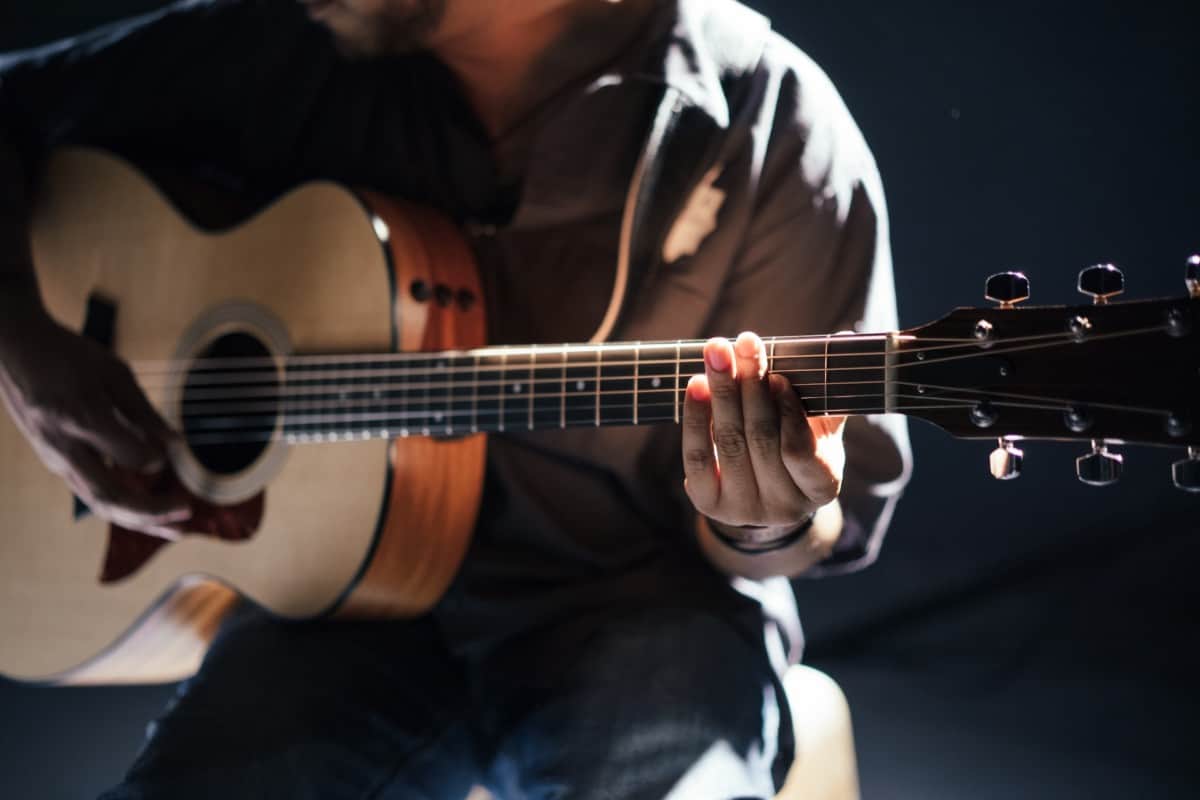 Learning the notes of our guitar is something we can do without boring music theory lessons. As a start, it’s good to know that the guitar uses the same musical notes as the rest of the instruments. It’s also good to know that the notes on the fretboard are the same for all types of guitars, whether they are acoustic, classical, or electric. So let’s go and learn some guitar notes for beginners.

Taking your first steps with the guitar notes

If you are taking your first steps as a beginner with guitar notes, it’s important to understand that the difference between the types of guitars is only the kind of sound they produce. They all work within the same musical framework and with the same distribution of notes per string.

To learn where the notes are on the guitar fretboard, it’s best to start by knowing the note that each of the six strings plays in the air. This means playing a string without pressing it and letting it sound without pressing any fret of the guitar. These notes will help you find the rest of the notes on each string.

Where are the notes in the fretboard?

Keep in mind that the open notes vary depending on the tuning being used. But with standard tuning, the open notes on each string will go from the bottom to the top or from the first to the sixth as follows: E, B, G, D, A, E.

To find the rest of the notes along your fretboard, you must know that the notes change from semitone to semitone from the first fret to the 12th fret, where the air note of the string played is repeated again.

For example, the progression of notes achieved on the sixth string (the thickest, topmost) is an F on the first string, F# on the second, G on the third, and so on. The progression goes through the open E, F, F#, G, G#, A, A#, B, C, C#, D, D#, and finally E again. We will see that the notes E and B don’t have sharps, so we have a total of 12 musical notes. This is repeated on each string in the same order taking into account the initial pitch of the open string.

The alphabet of the notes

The American cipher is a letter system in which each letter of the alphabet corresponds to a musical note from A to G. But, in addition, we can find scores in which the letters are accompanied by numbers in this way: F6, D-7, G-7, C7, etc. In this case, what the American cipher represents are not individual sounds but complete chords.

This type of notation is used to express the harmony of a song in an abbreviated form. So it’s common to see it in modern music scores. The problem with the American cipher is that it does not reflect either the exact rhythm or the arrangement of the notes of the chord. But this, which could be a disadvantage from the point of view of traditional writing, becomes an advantage when what is desired is that the interpreter can improvise, as is the case with Jazz music.

The tablature is a type of notation that graphically represents the positions and placement of the fingers on the instrument. It’s widely used in the learning and playing of the guitar. As with the American cipher, this notation does not reflect the rhythm of the music, so it’s necessary to know the piece by ear to make it sound like the original.

A conventional tablature is represented with a diagram where you can see the six strings of the guitar, and it’s indicated with a number in which fret the note has to be played.

On a chord chart, the guitar strings are represented vertically, the frets horizontally and circled numbers indicate where to put which finger.

There are cases where a piece of music is presented using a score accompanied by tablatures. In these cases, the aim is to make the study of the score as easy as possible.

The notes and the tuning of the guitar

We already wrote in other articles how to tune your guitar with a tuner or how to tune by ear. Tuning is something very important to make the guitar sound good. In these articles, we said that it doesn’t matter how well you play because if you don’t know how to tune accurately, everything you play will sound wrong. Therefore, knowing how to properly tune a guitar is an essential skill of every guitarist.

Regardless of whether you use a tuner or tune with your ear, there are basic concepts you need to know to be able to tune with whatever method you use. Knowing the open notes is essential. As we said before, in standard tuning, the open notes of each string going from the bottom to the top or from the first to the sixth string are always E, B, G, D, A, E. You have to know this basic concept, and you can then choose and learn the tuning method you prefer.

But when we play a chord, we are playing several notes or tones at once, so it’s like forming a word with different letters. When you play many notes at once, you create a chord. When you play the G chord, you strum all the strings at once. Each note is played at the same time to create the chord. Chords have a richer and more complete sound than simple notes.

To finish this article, let’s see what the natural notes, sharps, and flats are. Guitar notes that don’t have sharps or flats are called natural. Within the musical alphabet, the naturals are the notes A, B, C, D, E, F, and G. Therefore, these notes are called naturals because they have neither sharps nor flats. When we move over the fretboard of our guitar, we will find natural notes, sharps, and flats.

I hope this material has been helpful to you as you learn more about your guitar and musical notes.